Forests that receive high rainfall of up to 2000 mm are called rainforests. Rainforests are usually made up of big, tall trees and undergrowth. On the first layer a number of very large trees growing above the general canopy can reach the heights of 55 metres and above.

Some have been known to grow up to 60 metres high. These trees however are hardy as they have to withstand various weather conditions.

The layer where these trees are inhabited Eagles, butterflies, bats and some intrepid monkeys. After the tall trees comes the canopy, estimated to comprise 40 plant species, which is tremendous.

The inhabitants of the lofty trees also like to make their home in this level but there are more of other life forms there including various insect species.

Between the canopy and the forest there is a space, known as the under-storey. This is home to a number of birds, snakes, and lizards, as well as predators.
Armadillos also live here. The leaves are much larger at this level. Insect life is also abundant. Many seedlings that will grow to the canopy level are present in the under-storey. 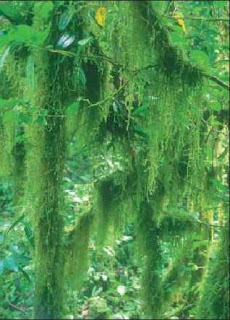 This layer can also be called a shrub layer. The layer just above the floor, consists of mainly large-leaved plants and small trees able to survive on the meager amount of light let through by the canopy.

Next come the forest floor which receives about two percent of the sunlight. Only plants that have adapted to the situation can grow in this region. Away from river banks, swamps and clearings where dense undergrowth is found, the forest floor is relatively clear of vegetation, as little sunlight penetrates to ground level.

It also contains decaying plant and animal matter, which disappears quickly due to the warm, humid conditions promoting rapid decay. Many forms of fungi grow here which help decay the animal and plant waste. Danum Valley and Maliau Basin are well known for its rainforests in Sabah.

Further Reading: The Tropical Rainforests of Sabah
Posted by e-borneo.com at 6:19 PM