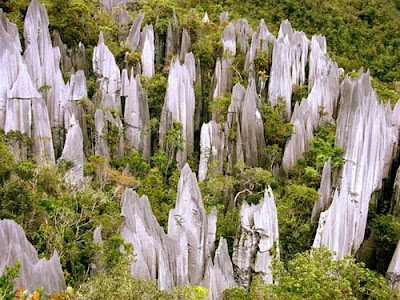 IF you are planning to visit Malaysia’s World Heritage Centre – the Mulu National Park – you should not miss trekking the 11.3km long Headhunters Trail or climb the famous 1,732m high Mulu Pinnacles.
Mulu can be reached by longboat from Nanga Mendamit in Limbang. Along the way, you can stop and rest at Mentawai Ranger Camp but the boat ride there will take quite a while – so make sure you bring along a raincoat just in case. You should also bring along plenty of drinking water because you won’t get to stop at any shops en route.

At Mentawai Ranger Camp, there is a hostel where you can spend the night before continuing to Kuala Tarikan in the morning.

The longboat ride to Kuala Tarikan along the Tarikan River will take over 30 minutes but the scenery is breathtaking. If lucky, you can see rare species of river fish in the clear water. Once you reach Kuala Tarikan, you have made it to the starting point of the Headhunters Trail where the thrills really begin.

It will take you almost one whole day to explore the Headhunters Trail where beautiful plants and trees, including wild orchids, Belian, Eucalyptus as well as fig, adorn the pristine surroundings. The exploration ends at Camp Five where you can rest for the night before tackling the Mulu Pinnacles the next day.

According to legend, ethnic groups such as the Murut, Iban, Tring, Berawan and Kayan frequently waged war along the Headhunters Trail. The raiding parties would drag their canoes across the watershed between the Mendalam River and the Melinau River.

The Murut and Iban of Mendalam were believed to have plundered the Tring and Berawan of Melinau. During one raid at a settlement near the Melinau Gorge, a number of women and children were beheaded while the men were away hunting.

Today, the remains of the victims can still be seen in a cave not far from the Trail. There, about 20 to 30 skulls are kept undisturbed in the stone jars. The area is believed to be a sacred spiritual resting place.

After walking for about three hours, you will have covered one-half the Trail. Here, you can rest at Batu Rikan, also known as Lubang Cina.

Legend has it that a long time ago, two Chinese traders tried to take their boat across the watershed, not knowing what awaited them at the end of it. Both were swept into the cave by flood and perished. That was how Lobang Cina (Chinese Hole) got its name.

It’s quite a tiring walk to Camp Five – and keep your fingers crossed for good weather. One type of forest dweller you don’t want to tangle with are blood-sucking leeches. But you’re safely out of their reach once you reach Camp Five. The beauty of Melinau River which runs through the Camp is really fantastic. It’s also a place where you can actually swim with tropical fishes in the Melinau River.

Another challenge which should only be attempted after a good rest, is the 2.4km ascent to the 1,732m Mulu Pinnacles, the highest limestone mountain in Malaysia. It’s quite a tough walk up even though it’s only 2.4km to the top. The distance may not sound all that far but a lot of energy as well as mental and physical fitness is needed to conquer the Pinnacles.

At the summit, you can view the breathtaking scenery around the Pinnacles, making the challenging ascent well worth the while. But bear in mind, the descent is equally daunting as most times, you have to climb down backwards.
Continue reading (Incl. Pics) at: Mulu challenges the adventurous
.
.
Posted by e-borneo.com at 6:09 PM