Colours of Borneo in Temburong 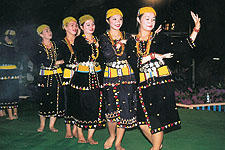 The region's diverse ethnic groups were in full view Saturday night when dancers from Brunei, Sabah and Sarawak performed at the Community Hall Complex, Temburong during the Borneo 2005 Ethnic Tradition Carnival and Fiesta, organised by Temburong District Tourism Department, Ministry of Industry and Primary Resources and Temburong District Office. The colourful carnival was aimed at unifying and strengthening the various races in Borneo.

The guest of honour at the event was the Temburong District Officer.

The event was also attended by a number of officers from Sabah and Sarawak.

The Acting Assistant Temburong District Officer stated that the carnival and fiesta this year recorded a historic moment when the performances were telecast live via satellite.

The objective of the carnival was to unify and strengthen the various races in Borneo Island including the Malaysian Federal Territory of Labuan.

Courtesy of Borneo Bulletin
Posted by e-borneo.com at 3:47 PM