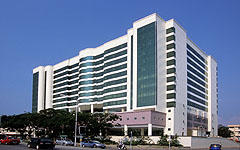 Kota Kinabalu: The five-star Le Meridien Kota Kinabalu opened its doors to guests Thursday, the latest addition to the number of international hotels recognising Sabah's rising importance as a premier tourist destination in Borneo, in general, and Malaysia in particular.

It is the second Le Meridien hotel in Malaysia, following the first that opened in Kuala Lumpur last year. Currently, there are 137 luxury and upscale Le Meridien hotels in 56 countries located in top cities throughout Europe, the Americas, Asia Pacific, Africa and Middle East.

Its General Manager, Winston L. Reinboth, said the hotel has 306 rooms, 32 of which are suites plus a presidential suite priced at RM3,500 per night.

However, only 127 rooms are available thus far at special rates inclusive of breakfast for two during the months of September and October.

"We expect full occupancy in late November or early December since it is the peak months for hotels in Sabah," he said at it's soft launch.

In line with the Government's call for 5-star hotels nationwide to offer minimum rates of USD$80 (RM288) by next year, he said those offered by Le Meridien are relatively cheap for European travellers.

Reinboth said the hotel, located in the heart of downtown Kota Kinabalu, offered guests easy access to local attractions, the commercial district, retail and entertainment facilities, many of them within walking distance.

It is the fifth and latest hotel hugging the coastline stretching from Tanjung Aru to Likas to capitalise on the scenic vistas offered by the five outlying islands and South China Sea.

"The hotel is only minutes from soft adventure, beaches and golfing and also the ideal location for business travellers, a leisure stay or alternatively for meetings and incentives," he said.

Nevertheless, the hotel aims to build its image as a business and leisure accommodation facility for meetings and trans-independent travellers, among others, he said.

The meeting and event facilities are located on the third floor comprising three meeting rooms equipped with the latest in modern technology and boasts an impressive view of the South China Sea.

Reinboth said the main ballroom could accommodate up to 360 guests for banquets. "The banqueting area is not as large as other resorts (operating within the city area) and we don't intend to compete with them on this aspect.

"And we can only handle one major group at a time unlike other resorts which can accommodate up to several groups," he said.

For leisure, he said the hotel features a gym with modern weight and cardiovascular equipment including an outdoor pool with full panoramic sea views and complemented with a pool bar.

The hotel also offers a restaurant facility, a cigar room and lounge.

Reinboth said the property was purchased in January this year with the deal signed on June 3. On why Kota Kinabalu was chosen as Le Meridien's second location in Malaysia, he said the city had huge potential as a major regional centre for business.

"The Government and tourism board has also been very supportiveÉwe can expect to see tremendous growth in the capital and there will be a lot of demand for accommodation facilities."

Its presence would lead to healthy competition between the international hotels operating in the State capital. He would be working closely with the Sabah Tourism Board (STB) on matters pertaining to tourism.

Reinboth said it would also benefit the local community in terms of employment opportunity, the majority of the 200-strong staff being Sabahans.

When fully operational, the hotel expects to have about 237 staff to run the daily operations.

Le Meridien was established in 1972 by Air France to provide a "home from home for its customers" with its first facility, a 1,000-room hotel in Paris that was named Le Meridien Etoile.

In April 2000, it signed a global strategic alliance with Japan's Nikko Hotels International while in December, 2000, Lehman Brothers Holding acquired the senior debt of Le Meridien.

Reinboth said several facilities would be launched in Thailand and China next year. It has 26 offices worldwide while its head office located in London.

Courtesy of Daily Express
Posted by e-borneo.com at 6:39 PM