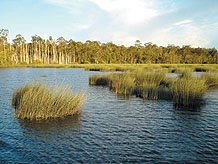 The tranquil paradise of Tasek Merimbun offers a safe haven for
wildlife and is a most relaxing site for nature enthusiasts. Photo by Samhan
By Meiji & Hj Bahrin HB

Once, Tasek Merimbun was a paradise for wildlife with its waters infested with crocodiles, thousands of flying foxes, water birds and many species, which have become extinct or had migrated due to human intervention.

Now, this outstanding Asean Heritage Park is now on the road to recovery.

Recent observations by the Brunei Museums staff had shown that the shy crocodiles are showing up in numbers around their boat during the night spotlighting survey. Hundreds of egrets, herons and oriental darters are now roosting by the lake.

Tasek Merimbun demonstrates a wholesome ecological processes and it has the capability to regenerate with minimal human intervention.

The site embodies the variety of ecosystems or species representing the typical Asean region. Most part of the park is in natural condition where the formation of the natural processes is still going on. The site is recognised with regional significance for the conservation of important or valuable species, ecosystems or genetic resources. It creates or promotes awareness of the importance of nature, biodiversity and the ecological process; it evokes nature whenever people see it.

This site plays a role in providing nutrients, materials or support for species, especially migratory ones, to the region as a whole. Both ecological processes and natural resources, which contribute to the maintenance of species or ecosystem, are often beyond natural boundaries.

This site possesses special features that could not be seen in any other site. It demonstrates the harmonious relationships between culture and ecology and also as the habitat of important or endangered flora or fauna.

The Maroon Langurs of the species Presbytis rubicunda and the Pied Hornbills of the species Anthrococeros coronatus were locally habituated by a few of the regular Brunei Museums staff at the park.

Rarely in one single conservation area, all eight species of hornbills found in Borneo can be found here indicating that Tasek Merimbun is still maintaining the incorporation of the key species that reflect the best and healthy tropical rainforest ecosystem in this region.