Sabah's Biodiversity gift to the world may be plundered 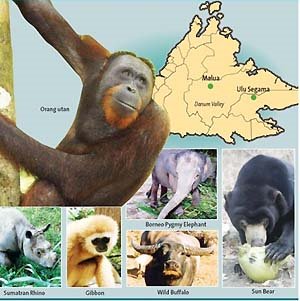 KUALA LUMPUR: Two Sabah forest reserves, to be bequeathed as Malaysia’s biodiversity gift to the world by the end of 2007, are set to be logged in a month or two – endangering countless species of plants and wildlife.

A race against time is underway to log the Malua and Ulu Segama forest reserves, covering a total of 236,825ha, which is three times the size of Singapore, before the deadline.

The state-owned Yayasan Sabah holds logging rights in the forest reserves and recently appointed at least three companies to log in the area.

Environmentalists and state officials fear that logging operations – expected to begin in a month or two – will have an impact on the wildlife there, especially sun bears, gibbons, tambadau or wild buffalo, Borneo pygmy elephants, Sumatran rhinos and orang utans.

When Chief Minister Datuk Musa Aman announced on March 15 that logging would cease in the forest reserves by the end of 2007, local and foreign non-governmental organisations hailed the move as the most important action ever taken to secure the future of Borneo’s endangered wildlife.

However, before that, the state government faced pressure to convert the two areas into oil palm plantations similar to what had been done for Benta Wawasan in neighbouring Kalabakan, another Yayasan Sabah concession.

Environmental groups are now aghast when they heard that Yayasan Sabah was proceeding with logging at Malua in Kinabatangan district and Ulu Segama in Lahad Datu district.

According to them, demarcation of the boundaries meant for the logging contractors had been concluded.

One official said: “There is no time for Yayasan Sabah to adopt the Reduced Impact Logging (RIL) methods in Malua and Ulu Segama.

“To carry out the RIL methods, a detailed inventory of the area and a forest management plan of both reserves, among others, must be carried out,” said the official, who felt that conventional logging methods were for logs to be extracted fast within the deadline.

Environmentalists noted that about half of Malua was logged as recently as four years ago.

The other half of the forest reserve had been left untouched for more than 10 years, resulting in a dense canopy of trees, with clear water in the rivers.

“Any logging activity is bound to impact the flora and fauna,” said another official.

It is uncertain if the Sabah Government would impose a condition requiring only trees with a diameter of 60cm and above to be extracted, to enable the forest to regenerate at a faster pace, he said.

The officials said one contractor was appointed to log in Ulu Segama and two others in Malua, although it was smaller in size, as the areas earmarked for logging at the latter area were dense.

The environmentalists felt that sun bears and gibbons would be the most threatened due to their restrictive diets and the destruction of their food source by logging.

Considered to be the more hardy creatures, the orang utans would have a better chance of survival in logged forests if the activity was not done too rapidly, they said.

A 2003 state government report stated that Malua and Ulu Segama with the forest reserves of Kuamut, Gunung Rara, Kalabakan and Danum Valley managed by Yayasan Sabah were the last strongholds for about 5,000 orang utans in Borneo.

Malua has the highest number of orang utans within the Yayasan Sabah forest concessions, having more than 800 primates while Ulu Segama is home to about 3,000 orang utans.

Both Malua and Ulu Segama reserves encircle the Danum Valley conservation area that together with Kinabalu Park and the Maliu Basin, will eventually become part of a one million hectare conservation zone in Sabah.

The zone was also seen by environmentalists as being in line with their efforts in setting up a 220,000sq km Heart of Borneo conservation area twice the size of Germany, involving Sabah, Sarawak, Kalimantan and Brunei.
Source: The Star