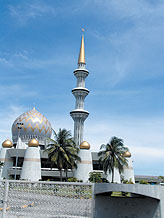 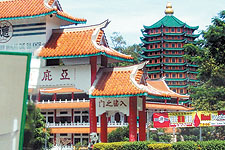 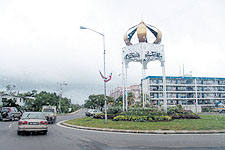 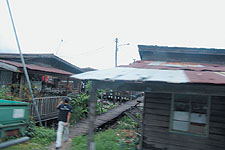 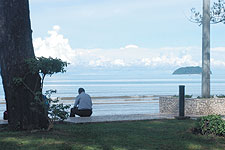 Kota Kinabalu has grown into a reputable financial, economic and tourism centre in the region. It has certainly moved with the times, and symbols of its advancement include the establishment of numerous deluxe hotels, roads stretching to the west- and east-coast towns, and modern structures such as the imposing Sabah Foundation Building.

Kota Kinabalu's history has been colourful indeed, with the power changing hands from the British to the Japanese, to the British, and back to the people of the land. Yet despite these various influences, and despite its breathtakingly fast progress, the city's rich cultural diversity and continued celebration of traditions and customs have remained intact.

Nowhere is this diversity more visible than in cosmopolitan KK, where the natives, comprising Malays, Chinese and some 32 ethnic groups, have assimilated well with the immigrants who flock to the state in pursuit of better opportunities. This multiculturalism is represented in the wide variety of cuisines available in and around town.

There is also a Kampong Ayer in Kota Kinabalu, much like Brunei. However, it is significantly smaller that the Water Village in Brunei. The diversity of Kota Kinabalu is vast from the Water village, to the vibrant shopping malls, and the ever luxurious resorts scattered throughout Kota Kinabalu.

Those who have been to Kota Kinabalu had only seen the insides of malls and hotels, but never really appreciated the city itself.

A little history on Kota Kinabalu, formerly called Jesselton. It is the state capital of Sabah, East Malaysia, on the island of Borneo; it is also the capital of the West Coast Division of Sabah.

During the late 1800s, the British North Borneo Company became interested in establishing colonies throughout North Borneo (now Sabah). In 1882, the Company created a small settlement on Pulau Gaya, which was already inhabited by a people known as the Bajaus. This first settlement was destroyed by the Bajau hero and rebel Mat Salleh in 1897.

After the effacement, the Company decided to relocate the settlement to the more easily defended mainland. A nearby fishing village named Api-Api which had already been chosen as the terminus for a North Borneo Railway, was expanded and renamed as Jesselton. The name came from Sir Charles Jessel, a director of the Company.

Eventually, Jesselton became a major trading post of North Borneo, dealing in rubber, rattan, honey, and wax. The planned railway was built and used to transport goods to the Jesselton harbour. Bajau uprisings during these times were not uncommon, and the Company worked to quell the long-standing threat of piracy in the region.

Jesselton was razed by the retreating British early in World War II to prevent it from falling into the hands of the Japanese. After the Japanese takeover of Borneo, it was renamed to Api (Malay: Fire). What remained of the town was destroyed again by Allied bombing in late World War II, with only three buildings left standing, as the Japanese were pushed out of Borneo.

After the war, the British North Borneo Company, unable to finance the huge costs of reconstruction, gave control of North Borneo to the British crown. The new colonial government elected to rebuild Jesselton as the capital of North Borneo instead of Sandakan, which had also been razed in the war. The need for speedy rebuilding led to much of Kota Kinabalu being built over with concrete apartment blocks. Since then, land reclamation projects have greatly expanded the flat land available in the city for building, and most of the modern city center is located on landfill.

Jesselton was renamed Kota Kinabalu in 1968 after Mount Kinabalu, about 45 km (28 mi) east-northeast of the city. The meaning of the name "Kinabalu" is uncertain. One theory suggests it means "Chinese widow", where 'Kina' meaning a Chinese person in Kadazan, and 'Balu' meaning widow in Malay. This theory derives from a folk tale about a Chinese prince who came to the Mountain in search of a mythical pearl which is guarded by a dragon at the top of the Mountain. While he was here, he married a local woman but later returned to China and left the woman heartbroken.

Alternatively, it is also argued that "Kinabalu" or "Akinabalu" is the name of the dragon which guards the mythical pearl itself. Another theory suggests that the term is derived from the name "Aki Nabalu" meaning the "revered place of the dead", in which, 'Aki' means ancestors, and 'Nabalu' being a name for the Mountain in the Dusun language.

"Kota" is a Malay word for town or city. It is also used formally in a few other Malaysian towns and cities, for example, Kota Bahru, Kota Tinggi, and Kota Kemuning. It could also be used informally to refer to any towns or cities.

Today the city's population is a mixture of many different races and ethnicities. The city consists of mainly Kadazans, Chinese and Bajaus. Most of the Chinese people in the city are Hakkas and can mainly be found in Luyang area. The area of Penampang is populated mainly by Kadazans, while the Bajaus mainly reside in Likas and Sembulan. This does not suggest that the people are socially segregated, in fact, the people of the city have lived peacefully side by side for many years.

People mainly speak Bahasa Malaysia, with a distinct Sabahan accent. However many still speak the language or dialect of their mother tongue when speaking with person of the same race or ethnicity. Mandarin and Hakka are still widely spoken by the Chinese. The number of Bahasa Kadazandusun speakers is thought to have dropped significantly, although some efforts can be seen to have been taken by some to revive the usage of the language.

However for those who speak Malay, it is noticeable that some of the Brunei Malay dialects are in their speech. This makes conversion with Sabahans easier for those who live in Brunei.

There are many places to visit in Kota Kinabalu, apart from the ever majestic Mount Kinabalu. The Tunku Abdul Rahman Park, a national Park consisting of the beautiful islands of Sapi, Mamutik, Manukan, Sulug and Gaya is about 15 to 30 minutes boat ride away from KK jetty. It is a popular spot for snorkeling.

There are other reserves and parks around Kota Kinabalu which are popular with tourists and locals. The resorts and family activities in Kota Kinabalu make the city a good place to spend a vacation with the family.
Courtesy of: Borneo Bulletin Sunday
Posted by e-borneo.com at 5:08 PM

I think there is an inaccuracy with your definition of " Kota " .

The word " Kota " actually means a " fort " or a " castle " or a place of residence surrounded by defensive wall. Since population often grows within a fortified area ( i.e a safe enclave ), the word " Kota " eventually got associated with the word " town " or " city ".
( in Japan, it is called Joukamachi, which literally means, a town which appeared around a feudal castle ).

The meaning of Kota as a " fort or a safe enclosure ( castle etc )" could be seen in the name " Kota Bharu ", a town in the East Coast of Pen. Malaysia
The word " Kota " actually refers to the Istana Balai Besar, a 250 years old palace complex surrounded by 3 metres high wooden wall in the heart of the town, then newly built ( " baru " = new ), which eventually gave the town its modern name ).

The case is the same with Kota Tinggi and Kota Kemuning because they both mean " fort " if you look further down in history.

A much clearer example would be the famous " Kota Melawati " of Kuala Selangor ( the Melawati Fort ).

However, I have no idea what is the real meaning for " Kota " in " Kota Kinabalu ". Perhaps it does mean " town " or a " city " but it is surely nice to know about Kota Kinabalu from your description !

I guess based on Kota Kinabalu's history, "kota" literally means just a town/city since it was never a "fort" in its true meaning before.