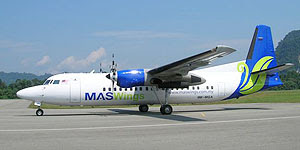 MULU - MASWings, a new subsidiary of Malaysia Airlines on Oct 1 took to the skies to serve Sabah and Sarawak. Its 30-minute inaugural flight from Miri to Mulu commenced at 9.20am, the first of 451 weekly flights to serve a network of 21 destinations in Sabah and Sarawak.

The ribbon-cutting ceremony of the aircraft bound for the next flight, Mulu to Miri was formalised by the Chief Minister who then inspected the interior of the aircraft.

In Sabah, meanwhile, Chief Minister Datuk Seri Musa Aman sent off passengers of MASWings' first flight in the state from Kota Kinabalu to Lahad Datu at 10am.

"We're delighted to take to the skies today, offering more frequency, better schedules and connectivity, and affordable fares to the communities in Sabah and Sarawak," Musa said.

Sarawak Chief Minister Tan Sri Abdul Taib Mahmud said the policy of Rural Air Service operated in Sarawak since the era of Borneo Airways, started on Oct 1, 1972 as a cornerstone of air services for Sarawak rural destination that was continued on with the subsidy policy when Borneo Airways and Malaysian Airways were combined.

In conjunction with the launch, MASWings also announced its first community programme "Wings for Children". It is to provide a much-needed support to young patients and their families in rural areas - a free airlift for seriously ill infant and children below 12 years who require immediate medical attention.

Courtesy of Borneo Bulletin
Posted by e-borneo.com at 6:23 PM