Jerudong Park - Wonders of the World at Dazzling Lights Festival 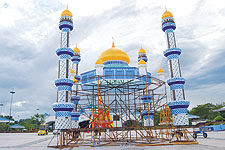 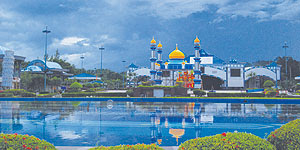 THE 'WONDERS OF THE WORLD' will take centre-stage at
Jerudong Park Come Dec 15. Pic shows a replica of the
Jame' Asr Hassanil Bolkiah Mosque - constructed on
a scale of 10:1 - the centrepiece of the attractions 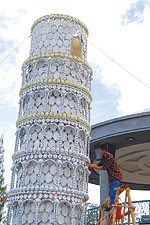 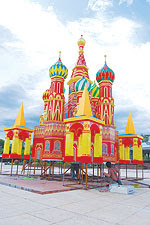 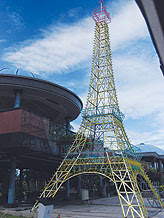 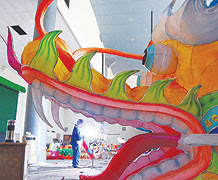 A dragon head, which will also be part of the 'Dazzling Lights Festival'

Photos courtesy of and Copyright to Huraizah Ahmad and Brunei Press Sdn Bhd.

Come December 15, Jerudong Park Garden will transform itself into a panoramic landscape of the 'Wonders of the World'.

The latest attraction that will feature at the 'Dazzling Lights Festival' from December 15 to January 6, will be the first of its kind in the country.

According to one of the organisers of the project, Tony Lim, Director of Afortune Int Pte Ltd of Singapore, he said a four-feet container loaded with raw materials arrived a month ago for the construction process of the project.

The event is expected to give the perfect touch to the ongoing 'Cartoon and Local Music Festival' featured at the playground as part of the end of year school holidays activity.

"This will be a unique experience for all to experience the beauty of magnificent structures around the world in one location," said Chua Pheng Chai, Manager of JP Playground and Amphitheatre.

"The lighting structures are made entirely from scratch such as treated silk coverings, wires and steel rods by 20 skilled workers from China. The final touches will be completed by today," he added.

The event will feature a replica of the Jame' Asr Hassanil Bolkiah Mosque constructed in scale of 1:10, which will be the centrepiece of the attraction.

Another major attraction to appear at the festival will be The Leaning Tower of Pisa. The only structure made out of steel frames and porcelain crockery items.