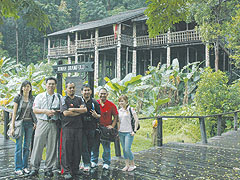 Posing in front of an Orang Ulu house 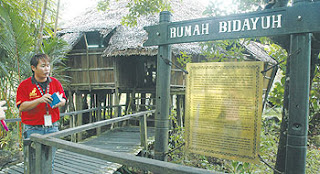 Mr Eric gives a briefing about the Bidayuh house 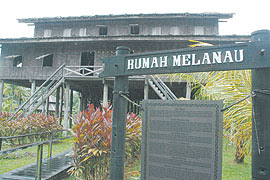 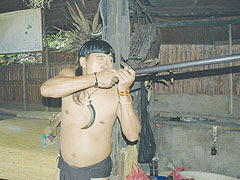 A native demonstrates the use of a blowpipe (Sumpit) 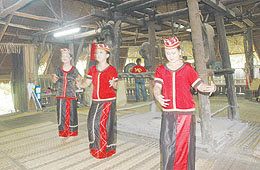 Photos courtesy of and Copyright to Yusrin Junaidi and Brunei Press Sdn Bhd.

By Yusrin Junaidi in Kuching

During my recent visit to Kuching, Sarawak, with local journalists from various media outlets which was arranged by Royal Brunei Airlines (RBA) and organised by the Sarawak Tourism Federation, I was amazed by Sarawak's myriad cultures. One of the most fascination places we toured was the Sarawak Cultural Village located in Santubong.

We were also told by Mr Eric, Cat City Executive Guide of Sarawak, that the Sarawak Cultural Village portrays the state's rich cultural diversity in one place. It is a seventeen-and-a-half-acre piece of land at the foothill of the legendary Mount of Santubong fronting the South China Sea with seven authentic ethnic houses built around a man-made lake.

The lake represents the propensity of Sarawakians to situate their dwellings alongside rivers or along the coastal areas. It is also a focal point for water-based activities.

All of us had the opportunity to further understand the history, customs and traditions of the main ethnic groups of the state, like the Ibans who make up the biggest demographic.

Renowned for their warrior courage and pride, the Ibans are experts in the jungle even today, showing great skills in hunting and collecting wild herbs and other produce.

There are many interesting curiosities on display at the village and visitors will perhaps immediately notice several hanging skulls, most of them are well over a hundred years old, serving a silent reminder of the days when the Ibans practiced headhunting. Preserved in a special way, the skulls are said to repel intruders and evil spirits from entering longhouses.

In Sarawak, there is a dance for almost every event. Victorious occasions, such as successful hunts, are often celebrated, and these dances differ according to the tribes' traditions. Some do not even have specific names. At the cultural village, most of these dances are showcased, providing another interesting insight into the art and heritage of the state's many cultures. The unique outfits of the ethnic men and women of Sarawak are also glittery and dazzling.

One of the dances is the "Datun Julud", an Orang Ulu traditional welcome dance performed by beautiful Orang Ulu maidens to welcome guests to the longhouse. "Ngajat Lesong" is an Iban dance where the Iban warrior demonstrates the extraordinary strength of his teeth by lifting a mortar, weighing around 20 kg. Dancing with the mortar hanging from his mouth showcases the agility of the warrior and is a feat of endurance.

The Bidayuh usually dance a "Langgi Julang", a ritual dance performed by the villagers on the occasion of electing a new chief for the village. The dance consists of Bidayuh men dancing on the "Julang" or brass tray, while accompanied by beautiful Bidayuh maidens.

One of the differences between the tribes can be seen in their costumes. Orang Ulu costumes are sewn in circular motions while Bidayuh costumes are mostly black and decorated with colourful feather fans, tiny bells and balls. Iban costumes are extremely bright; their attire is festooned with various accessories from head to toe, including feathered headgear, dangling bangles, beaded bags and silver anklets.

A very long time ago, the villagers also ate Sago grub. The Sago grub is the larva of the Capricorn beetle. It lives and feeds on the starchy pulp of the Sago palm tree, the Pantu palm and the Aping palm. A plump, creamy-yellow larva with a soft-ridged texture and a hard-shelled head, the Sago worm is regarded as a special high-nutrient delicacy among most ethnic groups in Sarawak. We heard that the Sago Grub tastes like prawns, and it is even better if eaten raw or roasted.

In the village, the young and exuberant village artistes provide magnificent multi-cultural dance performances in the modern theatre. The restaurant serves selected traditional Sarawakian food and the handicraft shop offers fine Sarawak handicraft and souvenirs. There are also handicraft-making demonstrations by skilled craftspeople. Traditional games, household chores, rituals and ceremonies are performed within and outside the ethnic houses.

Courtesy of: Borneo Bulletin Weekend
Posted by e-borneo.com at 11:09 PM