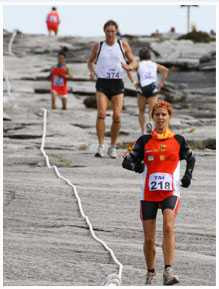 23 - 24 August 2008
For non-athletes, the trek up and down the mountain is an arduous 2-day achievement. At the TM Mt. Kinabalu International Climbathon, over 100 brawny men and women from around the world, including Great Britain, Venezuela, Spain, Japan, Germany and Singapore push themselves to physical and mental limits to run up and down the mountain at superhuman speed and stamina to complete a total distance of 21km in between 2 and 4 hours. In 2007, the Men’s Open category saw Spain’s Kilian Jornet Burgada come in first place, clocking 2:39.10s. Fellow Spaniard, Monica Ardid Ubed came in first at 3:44.08s in the Women’s category and the Veteran Men’s category saw Malaysian Sarun bin Sadi crowned as champion with a time of 3:24.03s

It all started in 1987 as a Sabah Parks' project to develop a rapid rescue squad—a team of rangers who can bring down injured climbers fast, especially useful during bad weather when helicopter rescue is not possible. Now the Climbathon is an endorsed venue by the Federation of Sport at Altitude (FSA) as the steepest of the six official races for the Buff Sky Runner World Series. Other races in this circuit include the “Sentiero delle Grigne” in Italy and Berga in Catalonia, Spain. The Climbathon in Kota Kinabalu is now also popular among European mountain runners who form the majority of the members of the World Mountain Running Association (WMRA), whose patron is the International Amateur Athletic Federations (IAAF).