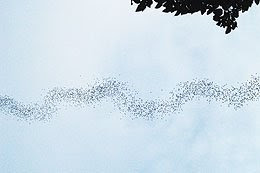 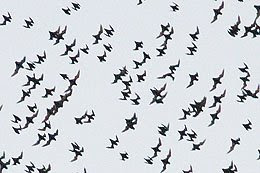 A close up shot of the free-tailed bats 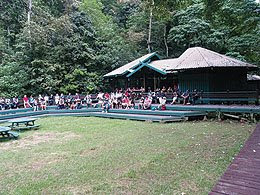 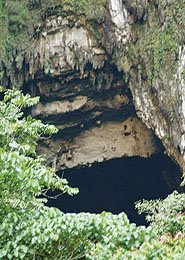 The Deer Cave, where the bats come out when the dawn falls

I heard about the majestic flocks of bats emerging from the Deer Cave. It is one of the most spectacular sights at Gunung Mulu National Park other than its caves as claimed by many others.

From our chalet at the park, we stretched our legs on a 15 km plank towards the bat observatory. En route the summit, we passed by peat swamps and alluvial forests. A variety of plant species can be observed. We encountered different arthropods and reptiles lurking around the plank or clinging to the leaves and branches.

Smaller caves are also can be found alongside the planks surrounded by forested rocky hill as we continued to walk.

After 45 minutes of walking, we reached the bats observatory. A special amphitheatre was constructed for the visitors' convenience. Already the best seats in the amphitheatre had been taken. Everybody was ready with their equipments - cameras with super telephoto zoom lens, tripods as well as binocular.

As it was still 5.30pm, everyone was patient enough to wait for the bats to come out.

The park guides briefed us about the phenomenon. The bats usually come out in millions. Vast numbers of free-tailed bats roost in Deer cave and can be seen most evenings pouring out from the entrances making a rushing noise like a sudden wind. Then bunching together in dense flocks, they would wheel and spiral high into the sky, creating strange shapes like giant smoke rings and vortexes, drifting fast towards the south and west.

The first flock of bats came out without us noticing it until a Japanese man 'oohed' and 'aahed' loudly and gazed up to the sky. Everyone looked up and stopped whatever they were doing. We were awestruck by the vast numbers.

Then we saw another numerous flock of bats, hovering at the entrance of the cave for a few minutes. Then they flew off in a huge number of wheeling flock of long sinuous clouds accompanied by a great whooshing roar from thousands of pairs of wings which can be heard from the ground.

No doubt the bats were heading to their feeding area. One must wonder like I did why the bats hovered first before flying off? Perhaps they were waiting for their comrades to join and form a large cloud for protection against their major predators, the Bat Hawks or perhaps there are some other explanations.

The free-tailed bats, mostly measuring 15cm from one wing tip to the other, flew in spiral-like formations, like ribbons intertwined in the air, and in wave-like formations.

Courtesy of Borneo Bulletin
.
Posted by e-borneo.com at 6:32 PM