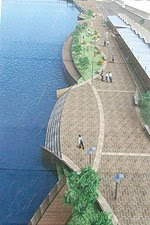 View of the Sipitang Esplanade when completed 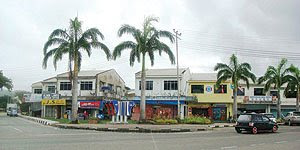 Fishing is one of the favourite pastimes in Sipitang

Sipitang's busy fishmongers take time off for a photo

Long regarded as just a transit town for visitors from Sarawak and Brunei Darussalam to Sabah, Sipitang, is set to woo visitors to the town with the construction of an esplanade.

Sipitang is the closest town in Sabah to the Sarawak border, located about 44 kilometres south of Beaufort and 144 kilometres from Kota Kinabalu, the state capital.

Beside its beautiful beach, weekly 'tamu' and local fruits, Sipitang, does not have much to offer local as well as foreign tourists at the moment. It is envisaged that once the 452-metre long and 75-metre wide esplanade is completed, the town will become a major landmark and tourist attraction for the Sipitang district.

It was a little after midday when I arrived at Sipitang on my way to Kota Kinabalu. Perhaps it was the heat of the day, or because I was tiring, Sipitang look inviting as I came upon it after crossing the border into Sabah.

Sipitang has a kind of hustle and bustle seaside-cum-transit town feel about it. The kind of place to observe the ebb and flow of daily life as others live it.

That afternoon I took a stroll around Sipitang's wet market, an event that was to prove highly entertaining. The little wet market was bustling with activities not only by the noisy fish mongers and their customers but also by the presence of a few middle-aged women selling traditional cakes and biscuits.

The friendly fish mongers greeted me and posed for pictures. According to one of them, most of the fish sold are of the kerisi, katambak and white fish varieties from Kuala Penyu, a quiet fishing village about 120 kilometres from Kota Kinabalu.

Across the street from the market was a row of two-storey shop houses. These buildings enclosed a walkway a block long that opened onto the street through a series of archways. The cool passageway was packed as shoppers bargained with vendors over cooking pots and bicycles, sacks of rice and dried prawns.

Along its main street were banks, supermarkets, provision shops, a dispensary and a number of coffee shops and restaurants.

Satay and fried-chicken sellers who had previously set up stalls along the waterfront before the construction of the esplanade have since relocated to the end of this street.

A stone throw away, a group of local women sat down at the end of the long wooden jetty, fishing. I asked them what they had caught.

"None yet," one of them told me, adding that they like to spend their free time fishing after finishing their chores at home.

I sat down beside them, removed my sandals, breathed in the tangy sea air and forgot my tiredness. Feeling rejuvenated, I left Sipitang in the late afternoon and continued my journey to Kota Kinabalu.

Courtesy of Borneo Bulletin
.
Posted by e-borneo.com at 3:49 PM