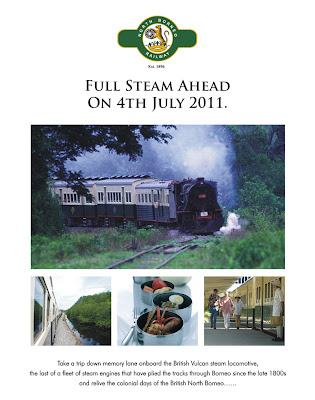 On 4th July 2011, the North Borneo Railway featuring the British ‘Vulcan’ Steam Engine will be making its 1st run.
Visitors to Kota Kinabalu, Sabah Malaysia will be able to enjoy a nostalgic journey on this vintage steam locomotive, one of the few functional locomotives left in the world that is fueled by wood, in beautifully-restored, historic green carriages. This classic train is operated to the highest of international standards and is fully compliant with modern safety standards.

The North Borneo Railway is a joint project between the Sutera Harbour Resort and the Sabah State Railway Department to help enhance the existing infrastructure and to promote Sabah as a tourist destination. The North Borneo Railway was officially launched on 22nd January 2000 in honour of Kota Kinabalu achieving city status on 2nd February 2000 and it was temporarily closed due to the reconstruction of the track by the Sabah State Railway Department.

The steam locomotive, the last of a fleet of locomotives that once plied the tracks through Borneo since the late 1880s, was manufactured by the Vulcan Foundry Ltd in Newton-le-Willows in Lancashire, United Kingdom. In 1954, Vulcan Foundry received the final order from the North Borneo Railway for three locomotives that resulted in a neat 2-6-2 tender locomotive of 58’-0” length, weighing 85 tons.

Managed by Sutera Harbour Resort, the train has a capacity for 80 passengers accommodated in 5 colonial-period carriages, each with a capacity of 16 passengers, and is named after a town along the journey … Papar, Kinarut, Tanjung Aru, Putatan and Kawang. For special charter services, the passenger load may be increased up to 160 passengers.