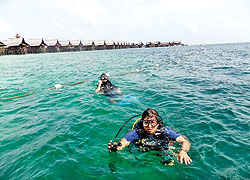 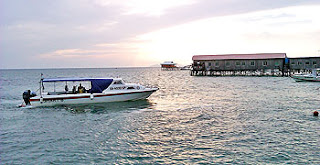 The serene sunset near the resort 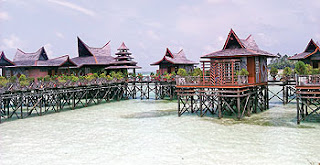 SMART Resort in Mabul island off Semporna, Sabah where the writer and
other first-time divers stayed during the 'Luminox Saves the Seas' expedition

The warm and tranquil waters surrounding Borneo Island is undoubtedly among the greatest sights in the region (or perhaps the world) but it also depends on a person's preference or choice in holiday excursions.

Some are satisfied with the tranquil view of an ocean screen saver on their computers, while others opt to view the ocean from a beachside resort as they sip on some cold beverages. But ask any avid divers; they would prefer to submerge themselves far beneath the surface of the ocean, exploring a world completely different from the one we humans are familiar with.

Somewhere in the middle you will find someone like me. I love the ocean - snorkelling, swimming and playing in it - I love the water. So naturally the many divers I know are constantly telling me how much I will love diving.

During my recent media invite to cover a dive expedition initiated by Luminox at different sites around Sabah, namely Mabul, Kapalai and Sipadan, and with the expertise and patience of my 'personal' dive instructor, Jonn Lu, I took the plunge.

Jonn is a dive instructor, videographer, climber and runs an NGO dedicated to saving sharks, called 'Shark Savers' (www.sharksavers.org) in both Hong Kong and Singapore.

He told me that many people participating in the discovery have plenty to fear. Among them is not being able to remove water from their masks to get accustomed to breathing out of a regulator and being underwater for long periods of time. But, he says, "It's just a matter of learning the right ways to do things and getting used to doing them."

I learnt that about 75 per cent of participants joining the discover dive treasured their experiences and about 50 per cent end up getting certified. Knowing that I live on an island surrounded by diverse reefs, various sea creatures, shipwrecks beaming with underwater life, and people I call friends who run local dive operators, I decided that diving was something I had to do at least once.

So after I filled out the indemnity form at the SMART Resort, in Mabul, off Semporna, Jonn sat me and another two non-divers down and explained the basics.

He began by explaining that a discover dive was meant to make us more comfortable with breathing underwater. Building my appreciation for the experience, he assured that he would control most of the technical stuff.

He stressed that if not educated, a fun experience could turn into a dangerous situation. I would be wearing a scuba vest with valves and a regulator and a tank with 3,000 pounds of pressure. For a discover dive, he would watch my gauges, while I focused on breathing.

I learned how to control my buoyancy by wearing weights and using a buoyancy compensator device (BCD) that fills my vest with air. I learned about pockets of air underwater - how air in the vest will bring you to the surface and releasing the air will help me go deeper into the water.

But more importantly, I learned about air pockets like your lungs, sinuses and ears that need to be treated correctly. For instance, Jonn told me that one of the most important things to remember while diving is not to hold my breath; holding your breath can cause a lung to rupture.

Once I understood these safety precautions, I learned the basics of actually doing things in the water. Then I learned the hand signals, but I couldn't break the habit of giving thumbs up when someone flashes me the OK sign. A thumbs up actually means I need to go to the surface.

After strapping on our gears on the boat, it took me about five tries to fall back into the warm tropical water and another five tries before my descent into the underwater world.

Once underwater, the experience was similar to being in another planet. It was like another world, with entirely new animals, new colours and new laws of physics.

At a depth of around 10 metres, we stopped descending. The current kept us moving through the channel. We passed through an outworldly 'forest' of corals and a bright alien explosion of colours.

Fish swam through the 'forest', chasing each other and peeking out from their hiding places. As I was busy trying to 'catch' these majestic creatures with my bare hands, I forgot all about my fears. Breathing underwater came naturally to me then. We passed a field of sea creatures, which I've yet to learn their names. I say "field" because that was exactly what it looked like - they were swaying in the current like trees do in a gale.

Just as we were about to surface, I saw a sea turtle at the corner of my eye about 15 feet away. I thought I was just imagining things, that I could perhaps be 'seeing things' after having been underwater for nearly 30 minutes.

We made for the surface and called the boat. As we boarded, took our gears off, the boatmen called out "Penyu! Penyu!" or "Turtles! Turtles!", there it was, the same sea turtle I saw when while I was diving. "It's (surfaced) to catch for air," Jonn said, adding that I was very lucky to see one, as some experienced divers waited years to come across sea turtles.

Hands down, this was one of the best experiences I've had in a long, long time. I'm definitely getting myself certified and will be back for more.