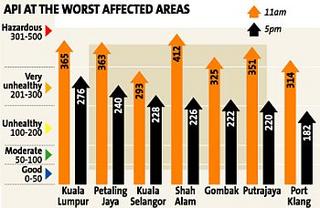 The haze has started to move north as the situation improved tremendously in Port Klang and Kuala Selangor – the two areas that have been placed under Haze Emergency.

Hundreds, if not thousands, of Klang Valley residents who had fled to places like Penang for a break are beginning to regret their journey as they could see the smog blanketing various part of the island's landmarks.

However, the Air Pollutant Index (API) for Penang remained between good and moderate, although the figures are slightly higher than previously.

In the Klang Valley, all areas recorded tremendous improvement, with none in the hazardous level.

However, the two areas remained under the Haze Emergency status and are expected to stay so until Sunday, when a review is expected.

Courtesy of The Star
Posted by e-borneo.com at 12:28 PM