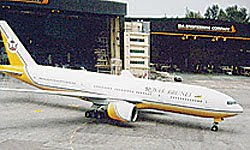 The national carrier will be replacing its current Boeing 767-300ER aircraft with the 777-200ER aircraft.

The first aircraft is set to arrive on May 26, while the next five will arrive between June and September this year.

Each 777-200ER aircraft will seat 30 business class and 255 economy class passengers. Both cabins will be equipped with RBA's skyshow in-flight entertainment system with personal screens for each passenger. The entertainment options will include video and audio on demand and a selection of video games.

RBA's first 777-200ER will be flying to London via Dubai during the third week of June this year.

Details about the lease agreement were revealed during a signing ceremony yesterday at Royal Brunei Recreational Club. RBA was represented by its CEO Robert Yang, while Singapore Airlines by its CEO Chew Choon Seng.

Introducing the Boeing 777-200ER into RBA's fleet is part of the airline's plan to renew its fleet and expand its operations. In addition to a higher passenger and cargo capacity than the 767s, the much-improved 777s will enhance RBA's ability to grow its revenue base.

Commenting on the agreement, Mr Yang said, "The support that RBA has received from Singapore Airlines brought this partnership beyond a pure lease. Under the lease terms, selected support programmes provided by original equipment manufacturers to SIA are also provided to RBA to cover the aircraft engines, auxiliary power unit and other selected components."

He added, over the next three years, RBA would be renewing its fleet, preparing it with better products offering for its customers and positioning itself for a growing network.

Searching for six planes with the same seat configuration, in excellent condition and competitive lease rate was a challenge. Bringing in six wide-bodied aircrafts of B777-200 ER and retiring the B767s has materialised, thanks to a strong, helpful and very understanding aviation partner.

In just a few months' time, RBA needs to replace its entire wide-bodied aircraft fleet while at the same time stay in business. Pilots and cabin crews need training while the in-flight products need to be enhanced and the engineering side has a lot of work to do.

By this September, all the six 777-200ERs will be part of the RBA fleet and by early November this year, the current B767 aircrafts will be returned to its rightful owner. No doubt, the negotiations were tough and engaging. But throughout the series of meetings, there were no backlogs. SIA was very professional in its approach and both sides found a common ground to workout in quick time.

Meanwhile, the CEO of Singapore Airlines said SIA would deliver the first 777-200 ER on May 26, followed by two more units in June and one each in subsequent months. By the end of September, RBA will be operating six 777-200 ERs.

The aircraft type is proved to be reliable and efficient, comfortable and popular among passengers with useful cargo capacity. "I am confident that it would be a very good fleet for RBA's network and that you will be pleased with its performance," he added.

However, even the best airplane requires proper maintenance and Singapore Airlines has well-established reputation in the airline industry in this regard. SIA's subsidiary company, SIA Engineering has set up joint ventures with original equipment manufacturers, he added.
Courtesy of Borneo Bulletin
.
.
Posted by e-borneo.com at 6:19 PM