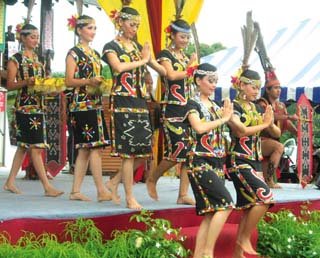 COLOURS AND BEAUTIES OF KALIMARAN... Murut dancers strutting
on stage while performing a ceremony at Murut Cultural Centre in
Tenom. Photo courtesy of and copyright to New Sabah Times. 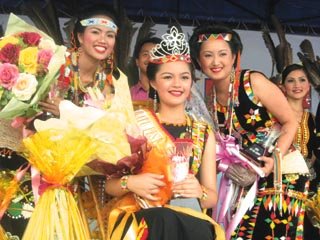 TENOM: The district’s main festival, Pesta Kalimaran, which showcases the Murut culture and traditions, has been given a shot in the arm as more funds will be given beginning next year.

The festival will be placed under the supervision of the district office which will also be the organiser from next year onward.

Chief Minister Datuk Seri Musa Haji Aman said the government would allocate RM30,000 to organise the event, which has been placed in the State tourism calendar.

The Sabah Cultural Board will channel the fund to the Tenom district office, he said in his speech at the closing of the festival at the Murut Cultural Centre here yesterday.

Musa said that the government was highly committed in preserving the unique cultures of Sabah including that of the Murut community.

“We want to ensure that the traditions and culture of the Murut community will be inherited by the future generation,” he said adding that the government was supportive of all cultural events.

According to him, Pesta Kalimaran would be able to promote unity among the different races besides becoming a tourist attraction.

He urged tour and travel operators to promote the festival by throwing packages to attract foreign visitors.

The federal government, he said has agreed to allocate RM1.6 million to refurbish the cultural centre.

“Actually this district has many attractions from the Agricultural Park in Lagud Seberang and the Padas River where white-water rafting is held,” he added.