On the horizon looms the world's largest Water Village, for centuries
the home for thousands of wooden and concrete houses on stilts,
(photo below) as seen from a vantage view at the
Yayasan Sultan Haji Hassanal Bolkiah Complex.

A wooden water taxi rules the waves and gives a wobbly ride. 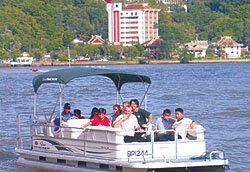 Crossing the Brunei river on a pontoon boat. 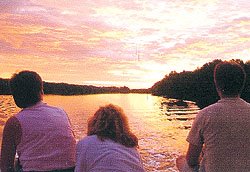 Watching the sunset from a boat cruising the Brunei river.

Tourists start their cruise on a Kampong Ayer river tour from Bandar Seri Begawan, (bandar, a Persian word, means port or town), the former Brunei Town on land on the left bank of the Brunei river. Over a thousand years ago, the sultanate's three original settlements, Kota Batu, Kampong Ayer and Brunei Town, rose along the banks of the Brunei river.

Wooden, engine-driven water taxis at the jetties at the Yayasan shopping complex or on Jalan Residency provide the cheapest ($1 a person) rides to cross the river and into Kampong Ayer, the world's largest Water Village, which Europeans called "Venice of the East".

Tourists can take a pontoon boat, tour the Water Village and drop in its stilt houses for tea and native cakes.

A 20-minute boat ride from the jetty brings them to the mangrove swamps and riverine forests to see the Proboscis monkeys, birds of prey, kingfishers, mangrove snakes, monitor lizards, otters, flying foxes, and saltwater crocodiles lazing in the sun.

In the late afternoon, tourists can watch the sun set on the horizon, and see egrets flying back to the mangroves for the night.

In the evening, they can join a firefly night tour and watch fireflies flash lights of communication from the nipah palms and mangrove swamps along the river's tributaries.

From every Brunei River cruise it books, a sister company of Sunshine Tours, AA Dolphin Dive and Trading Sdn Bhd, pledges to donate US$1 to Brunei's Environment Fund.

"Our tours create awareness on conservation (of the environment and protection of wildlife along the Brunei river) and donate money to the government," says Peter Chieng, Director of Sales of Sunshine Tours, a 25-year-old inbound travel agency in Brunei.

"We came up with a pontoon boat - which has been used in the United States for a decade. A lot of Brunei tourists were impressed with the 8-1/2 feet wide and 24 feet long pontoon boat.

"The first boat came in November 2005, and two more came before this year's Chinese New Year. Another unit is coming in August to increase the fleet to five pontoon boats for the Brunei river tour.

"It's easy for tourists to look around the boat, stand up, walk to the front and end. The pontoon boat offers an unlimited angle of view. There's no way you can stand on a wooden boat.

A river cruise at Kampong Ayer, which rose at the confluence of the Kedayan and Brunei rivers from 1661 onwards, passes through several villages.

The tour visits the Mini Museum of Kampong Saba, the capital's oldest ward, village or kampong.

The people of Kg Saba (saba means upstream) were the original followers of the first ruler of Brunei, Awang Alak Betatar, who married a Johor princess.

The Probosis monkey tour is a leisurely, two-hours-and-30-minutes morning or afternoon cruise through the mangrove swamps and riverine forests in search of the endangered species found only in the island of Borneo.

Old malays call the tree-leaping, leaf-eating simians Orang Belanda or Flying Dutchmen, because the monkeys look like the hairy, big-nosed and pot bellied Europeans traders and colonisers of old.

The males have long, pendulous and protruding noses. Because of the monkeys' diet of green fruits, seeds and leaves, their bellies are bloated by gas released by the digestive process. They can't eat ripe fruits.

Tourists taking the firefly sighting and seafood dinner package will be picked up at their hotels.

They will be transferred to Portview Seafood Restaurant overlooking the Water Village and the Brunei river, where they will be served a seafood steamboat dinner.

Their next stop is at the jetty to board a pontoon boat for a cruise to the river's tributaries to observe fireflies. These lightning bugs, which are definitely not flies, light up the summer nights.

They are nocturnal, luminous beetles with special light-emitting organs in their abdomens. The flying males emit courtship flash patterns in search of females, which signal a series of flashes in response. As the males fly closer to the mimicking females, they are captured and eaten.

On the pontoon boat, guests will be provided with rain jackets, binoculars, mineral water, and in the night, search lights for nocturnal animals. An experienced tour guide explains the sights.

At 7 pm the night cruise tour starts and takes the tourists to Kampong Saba and Kampong Burung Pingai on the furthest end of the old capital's villages on the left bank of the Brunei river.

The people of Kampong Burong Pingai are the descendants of the Johor people who came to Brunei when its first sultan married a Johor princess.

The Johor sultan had sent a bird, burong pingai, to look after her daughter. When the bird found her, she was already married to Awang Alak Betatar, who became Brunei's first sultan.

This kampong, named after the princess' pet bird, and cared for by its inhabitants, was famous for its nakhoda (sea captains and traders). It was also the most frequently mentioned Brunei village in British accounts.

Across the palace, in the middle of the river, is a natural rock formation shaped like an upturned boat.

Old folks say this is the remains of a boat, sunk during a storm, that carried an ungrateful son who had forsaken his mother after he got rich and got married abroad.

As the pontoon boat returns to the jetty, the walkway of the Brunei landmark, Yayasan Sultan Haji Hassanal Bolkiah, the country's largest shopping mall, offers an unobstructed view of the lighted-up Omar Ali Saifuddien mosque.

Content Courtesy of and photos copyright to Borneo Bulletin Weekend
Posted by e-borneo.com at 5:49 AM