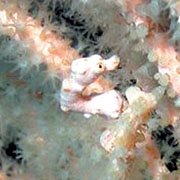 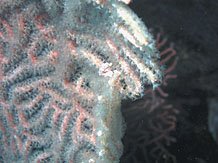 The discovery, one of the most sought after finds by divers, is Brunei's first Pygmy Seahorse discovered around Burn's Patch.

Finding one can be a daunting task since these delicate creatures are normally found among seafans, which are only the size of the tip of our fingernail.

Although these creatures are normally around 15mm in length with their tails curled around a seafan, some may appear even smaller.

The team of divers from Scuba Tech - Amillson, Hermione, Reuben and Yusrin - took almost 25 minutes to spot one using only one Ikelite DS 125 TTL Strobe.

"The lucky discovery two weeks after the largest whale shark discovery this year has been a good sign of more new promising discoveries for this year", said Yusrin from Scuba Tech International in an interview.

The new finding by Scuba Tech International was recorded in 35 shots using the Olympus 7070 Digital.

However, only one shot was only suitable to be exhibited in the recent ADEX Dive Exhibition in Singapore, informed Yusrin.

The Pygmy seahorse is a relative of the common seahorse and can grow up to two centimetres in length.

The well-camouflaged creature has a short snout with rounded knob-like coronet and irregular bulbous tubercles all over its body along with rounded spine above each eye and on each cheek.

There are two known colour morphs for these species including pale grey or purple with pink or red tubercles and yellow with orange tubercles.

These are found camouflaged besides gorgonians (seafans) of the genus Muricella, in depths of 16-40m.

Courtesy of Borneo Bulletin
Posted by e-borneo.com at 5:12 PM