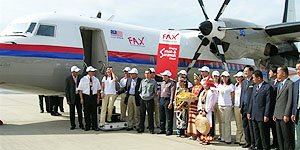 The FAX aircraft being greeted to a welcoming reception after it
landed at the Miri Airport on Aug 1. - © 2006 George Francis
By George Francis

MIRI - Malaysia's third largest airline, FlyAsian Xpress (FAX) yesterday spread its wings to Sarawak and Sabah in its domestic flight operations with an inaugural Fokker flight D7 2263 with 49 passengers from Sibu, landing approximately at 9.20am at Miri airport.

They were greeted with a welcoming reception led by Miri deputy Resident Ismail Hanis and Raja Mohd Azmi Raja Razali, CEO of FAX, which saw souvenirs being presented to guests to commemorate the momentous event.

FAX has been sub-contracted by the budget airline AirAsia to take over Malaysia Airlines' domestic flight operations and rural air service within Sarawak and Sabah.

FAX received its air operator certificate from the Transport Ministry on July 27. The new airline was borne as a result of government's rationalisation of domestic routes to service 26 destinations within the two Borneo states.

FAX operates a point-to-point with hub in Miri for Sarawak and Kota Kinabalu for Sabah using a fleet of seven Fokker 50s (50 seats) and five Twin Otters (19 seats).

The aircraft are ideal to service routes with lower traffic volume to link up rural areas with cities and townships, and most rural airports and landing strips in these areas are able to accommodate these lower capacity propeller aircrafts.

Sixty-seven pilots comprising 33 captains and 34 first officers had been seconded to FAX from Malaysia Airlines for the domestic operations, and with a staff strength of 180.

FAX appointed AirAsia as its ground-handling agent which will manage all ground operation aspects including ticket reservation, check-in counters and in-flight services at all the destinations that AirAsia flies to. The existing ground-handlers currently servicing MAS routes will continue to handle the FAX ground operations.

Raja Azmi said the airline targeted 700,000 passengers this year with the aptly captured tagline "Affordable Accessibility" with a promotional fare of RM9.99 for all destinations.
Courtesy of Borneo Bulletin