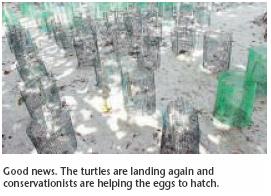 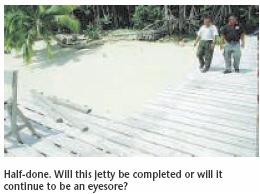 The custodians have spoken
Protection is the Priority
By JASWINDER KAUR

It’s a 90-minute boat ride from Semporna, but the journey can stretch to about 120 minutes in choppy weather. Despite the longer heart-stopping boat ride, JASWINDER KAUR found a jewel of an island as it should be, almost.
JUST a tiny dot in the Celebes Sea off Borneo’s northeastern coast.

That was all Sipadan meant to the world less than two decades ago, until renowned ocean adventurer Jacques Cousteau reached its shores and proclaimed it "an untouched piece of art".

Despite the bumps and scrapes over the years, the custodians of Sipadan are working for it to be just that.

By the late 1980s, divers from as far as half-way across the world were taking red-eye flights and bumpy boat rides to the island to swim with fish the shades of colouring pencils.

The abduction of 21 people by bandits six years ago and a barge damaging corals in May have not kept divers away from Sipadan, which covers about 30 football fields.

Since the five resorts built on Sipadan were demolished last year, divers can only visit the island for the day.

Applications for permits to enter Sipadan today are three-fold from the 120 that Sabah Parks can issue daily.

Diving is revenue, but protection is the priority say the island’s custodians.

Sabah State Secretary Datuk K.Y. Mustafa said Sipadan would soon be gazetted as a marine park and visitor numbers will always be restricted.

"The pertinent point here is that Sipadan is home to marine life, and also birds," said Mustafa.

He co-chairs the Joint Committee on the Management and Supervision of Pulau Sipadan and Pulau Ligitan with the Chief Secretary to the Government, Tan Sri Samsuddin Osman.

(The Federal Government is involved in managing Sipadan as it is gazetted as a protected area under the Protected Places and Protected Areas Act 1959 for security reasons.)

"After the resorts were demolished early last year, turtle landings have increased and this is a strong indication that we have done the right thing.

"Since guests no longer spend nights at the island, turtles are returning to their natural habitat."

An average of two turtles arrived at Sipadan every night this year.

By the end of the year, an amendment to the Parks Enactment 1984 will be tabled to gazette Sipadan as a marine park.

"We should be able to gazette it next year and this will provide better protection for Sipadan."

Mustafa acknowledged it was difficult to take action against those who damage the marine environment until such protection was in place.

The contractor who damaged reefs after off-loading construction material at Sipadan could, as a "goodwill" measure", clear the mess, said Mustafa. Failing which Sabah Parks would have to do it.

During a recent visit to Sipadan, the New Sunday Times saw rows of rusting metal rods beneath creeper plants, wood planks and cement that the contractor, building day facilities for the divers, had sent to the island.

Two rows of kongsi and an unfinished jetty are also part of the former Sipadan Dive Centre resort site.

A project to build a RM5 million clubhouse was called off after divers alerted the world that a barge had damaged corals. A termination letter was served on the contractor this month.

At the moment, divers take a breather on the beach and have their meals under the hot sun between dives. They are allowed to venture 50 metres into the island to use three toilets which are in poor condition.

A small area close to the jetty is scattered with dilapidated wooden buildings left behind by resort operators and now used by security forces and Sabah Parks officers.

The rest of the island is clear of structures and is clean.

Trees have started to grow at former resort sites.

Mustafa said the Tourism, Culture and Environment Ministry, Sabah Parks, Institute for Environment and Development and the National Security Division are working on a reduced scope for rest facilities as directed by the Sabah Cabinet and the Joint Committee.

"When we build facilities, we have to look at sanitation. When the resorts were operating at Sipadan, everything was pumped into the island.

"One big worry in the last 10 years has been detergent. We can’t just let it seep into the ground.

"Facilities that involve mankind will have some impact on the natural environment. We need to minimise and mitigate this."

Mustafa said development would be confined to less than five per cent of the island and the rest would remain off limits to visitors.

The scaled down rest facilities will be built on 0.6ha. The island measures 13.5ha.

On littering, like mineral water bottles dumped behind a signboard that warns rubbish is not to be thrown there, Mustafa said Sabah Parks would continue to monitor the island and clean up.

Asked how Sipadan’s image as one of the top dive sites in the world could be restored following negative reports, Mustafa said:

"It is always easy to make judgements. People have to come and see for themselves. Only then would they be able to make a fair assessment and judgement."
Courtesy of New Straits Times
Posted by e-borneo.com at 5:39 PM