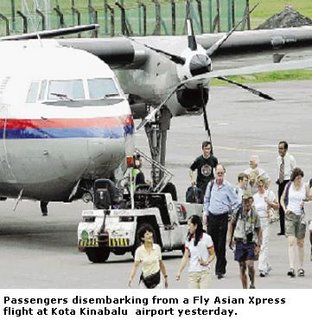 By Julia Chan and Lydia Gomez

KOTA KINABALU: Fly Asian Xpress began its service in Sabah and Sarawak yesterday with a maiden flight from here to Bintulu at 6.50am.

The airline, a sub-contractor of low-cost carrier AirAsia, took over the rural routes operated by MAS.

There were only two passengers on the plane to Bintulu, but later flights to Lahat Datu, Sandakan and Mulu had a load of about 65 per cent.

"So far, it’s been quite smooth, other than a minor disturbance during the early morning flights due to the rain," said AirAsia Kota Kinabalu station manager Wilfred Wong.

"The Bintulu flight is new, people are not used to it yet. They are more familiar with Malaysia Airlines, and it will take some time for it to pick up."

FAX uses AirAsia’s infrastructure including sales and booking, staff and ground handling, with the exception of pilots, who are on secondment from MAS.

Wong said it was slightly chaotic in Terminal 2, where AirAsia operates from, due to the double load taken on by the terminal from 14 flights to 28 flights a day.

The terminal is undergoing upgrading works to accommodate more than double its current capacity of 450 passengers per hour.

FAX uses the Fokker 50s and Twin Otter aircrafts. Its routes include the Kota Kinabalu to Lahad Datu, Sandakan, Tawau, Bintulu, Sibu and Mulu; and between Miri and Bintulu, Mulu, Sibu, Limbang and Labuan.

Belgian tour guide Ilse Schillemans, who was leading a group of 21 tourists from Mulu to Kota Kinabalu, said the check-in at the Mulu airport took a long time because the baggage was weighed individually and many had to pay for excess weight.

"There is an easier system. Group check-ins should be given more considerations — like being able to check-in at once, and going easy on the baggage allowance," she said.

Arthur Augustine, also a tour guide, agreed with Schillemans that those coming on international flights should be given bigger baggage allowance than the 15kg.

"These people travel here from so far away, of course their bags are going to be bigger," he said.

In Miri, FAX chief executive officer Raja Mohd Azmi Raja Razali said the number of passengers using the airline in the next 12 months was expected to be about 700,000.

He said FAX, wholly owned by Tune Air Sdn Bhd, would follow in the footsteps of the low-budget airline AiaAsia to attract more people to the two states.

"We will try to achieve this target by applying the same principle as AirAsia in terms of variable fares and promotions," he told reporters at the Miri airport after the first flight from Sibu landed.

The flight, carrying 50 passengers, arrived at 9.30am.

FAX will operate hubs in Miri, Sabah and Kota Kinabalu.

Raja Mohd Azmi said the number of flights to all destinations would be reviewed after three months and their frequencies adjusted according to the demand for the service.

Bookings for flights can be done on the FAX website www.flyasianxpress.com and at all existing AirAsia airport and sales offices nationwide and from appointed travel agents.
Courtesy of New Straits Times
Posted by e-borneo.com at 12:27 PM