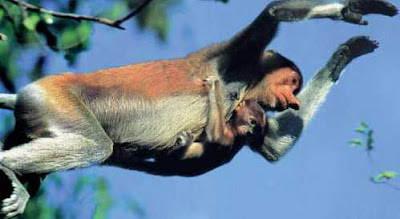 By HERMAN SCHOLZ, The Flying Dusun

It was not a planned visit and so much more was I astonished at what awaited us: I recently went to the Labuk Bay Proboscis Monkey Sanctuary near Sandakan and it was a great surprise and wonderful experience amidst plantations and mangroves alike, a true sanctuary for not only Proboscis monkeys (endemic to Borneo) but also other plant and animal species in Borneo.

The sanctuary is an exemplary illustration of how humans and animals can live alongside each other, with but a small sacrifice from our part: while embarking on oil palm plantation development some 400 acres of mangrove forest, initially also bought for commercial development, were set aside as a unique sanctuary for the equally unique Proboscis monkey and other animals and plants. The conservation project started spontaneously when the owner of the land learned more about the monkeys and their predicament – struggle for survival in the wild where natural habitats are under heavy pressure and disappear at an alarmingly fast rate.

Few people in their quest for commercial gain pay much attention to the plight of monkeys and other animals on their land, but this plantation owner made a well thought decision and refrained from bulldozing the mangroves for more plantations. What started out as a simple project is now a recognised effort and also a tourist sanctuary where one can spend a night (or better two!) amongst mangroves and their irreplaceable eco system. 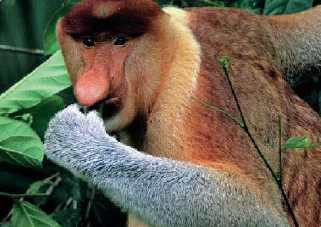 Mangroves play a vital role in coastal environments, not only preventing erosion and flooding but also providing spawning grounds and protection for many fish species, alongside with birds and crabs, crocodiles and monkeys, healing plants and traditional building materials and much more. Through their filtering action they also prevent coral reefs off the shore from being suffocated by silt rivers inevitably carry with them; they act as a natural barrier between the sea and the land – in short, mangroves are extremely important areas but unfortunately that is only slowly being recognised and for many mangroves throughout the world it is too late. They have been developed and the price humans pay is heavy.

Few places in Sabah now offer such great opportunities to watch Proboscis monkeys (and others) so close, and offer an opportunity to learn more about their predicament in general and what is being done for conservation of their species and natural habitat. 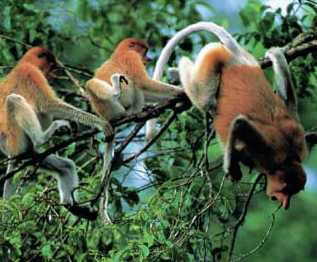 To observe these unique monkeys, called Monyet Belanda in the Malay language – meaning Dutchman – it is best to visit their natural sleepover places along rivers in Borneo (read: Sabah). The monkeys settle usually around 5 pm in trees along the banks. Until everybody finds their branches there is a lot of awesome “monkeyacrobatics” to be observed! In Sabah we recommend the following sites:

In Sarawak you will have to go to the Bako National Park, easily reachable from Kuching within some 45 minutes. Tour operators offer days tours but there are also overnight facilities available. The Bako National Park is amongst Sarawak’s oldest and most intriguing, offering various habitats and many types of vegetation that can be explored on well maintained treks but the sighting of Proboscis monkeys, especially on a day tour cannot be guaranteed.