Becoming one with nature at Gunung Mulu National Park 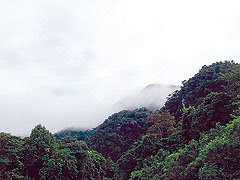 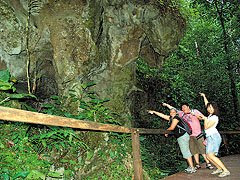 A small cave we encountered along the trail

Mulu National Park in Sarawak is but one of the many national heritage parks found in Borneo. The park offers magnificent views and would be the perfect destination for adventurers seeking the wonders and beauty of a natural rainforest and its majestic caves.

A trip to Gunung Mulu National Park was our next destination for the December holidays. We had planned for quite some time to take on the physically challenging adventure and eventually it was Noy who organised the wonderful getaway.

We departed Bandar Seri Begawan at 8.30 am and because of the heavy traffic at the Sungai Tujuh Immigration Post, we arrived at Miri International Airport some five hours later.

Miri is the main gateway to Gunung Mulu National Park. At the Miri International Airport, we checked in our luggage and got ready for our flight to Mulu Airport on a Maswings Fokker.

The 25-minute flight allowed us to take in an aerial view of Sarawak, which boasted a fascinating view of the meandering rivers as well as an ox-bow lake.

After touching down at Mulu Airport, we hopped into a van for a RM5 per person, 30-minute ride to Mulu Park. We then headed to the park's headquarters for registration purposes. We were handed the key to our chalet as well as a schedule detailing the activities we had lined up for us over the next three days.

The room had four single beds, a shower and a ceiling room, but the icing on the cake was definitely the fact that the room also had an air-conditioner.

Kitchen facilities mean that budget travellers can prepare their own food and save a few dollars. But if you intend to stay out of the kitchen, then take comfort in the fact that nearby, a canteen offers both Asian and Western meals.

The park also boasts souvenir shops as well as the Mulu Discovery Centre, where visitors can learn more about Mulu, particularly its biodiversity, caves and bats.

To say the park was nice would be an understatement. It was top-notch. Quiet and serene, the mornings were extremely refreshing, with mist enveloping the mountains, forest and park.

"This is the perfect place to be pampered," I thought to myself as I took in the fresh breeze and tranquil surroundings.

Walking along the trail gave me the chance to see what nature had to offer. The park is rich in plant and animal species. My eyes kept wandering as I desperately tried not to miss out on anything, while my hands eagerly worked the camera, hoping to capture as much as I could for keepsake.

The sounds of the birds and insects were an orchestra of nature and this only amplified as night fell.

At night, everything around you pulses with life. So I took the opportunity to venture out in the dark (unguided of course!) with only my headlight, camera and brave comrade Jeremy.

As we pushed through the bushes and branches, we discovered various interesting creatures of the slithery kind, such as the pit viper and stripe bronzeback tree snake.

But, if luck is on your side, you might even be able to spot a Bearcat (Binturong) and slow loris.

Guided tours are available for those who are not too keen on exploring the place without expert help.

What we learnt about the park is that it contains eight different types of forests - including peat swamp and mixed dipterocarp, moss forest and stunted upper monane vegetation.