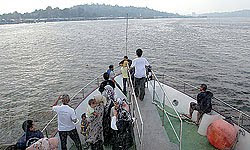 Out on the deck to get a better view If glossy brochures are to be believed, many places in this world have breathtaking scenes and rustic old world charm but to experience it yourself is the best way to believe what you see on a piece of fancy brochure.

Even though Brunei Darussalam is a small country with an area of 5,765 sq km, it offers many 'treasures' to its people as well as tourists such as cultural heritage, pristine flora and fauna, sandy white beaches as well as other interesting places.

It's true, to get the best of the attractions is to experience them ourselves. And so a group of 40, mostly Bruneians, went on a cruise around Brunei Bay.

Having departed from the Muara Port, our voyage began to explore the Brunei Bay and Brunei River. En route, we saw sailors befriend the winds as they sailed in Brunei waters. The weather was perfectly clear and beautiful even though it was humid and blazing hot. The sea was so beautiful and tranquil. We escaped the heat by retreating into the air-conditioned cabin where it was cooler and comfortable sofa seats were also provided.

Entering Brunei River, we saw one of the historical islands, 'Pulau Chermin' or Chermin Island. We passed a few islands before we encountered some fishermen, which shows that traditional fishing is still practised even though the country has reached the era of modernisation. Along the river, we realised that Brunei is so rich with mangrove forests. They are everywhere!

Talking about development, we encountered one resort amongst the mangroves along the river, the Mangrove Forest Resort. Some of us did not know about its existence and this shows one of the many developments we have so far to improve our tourism industry in line with 'Kenali Negara Kitani' campaign.

As we know, the mangroves are home to many fascinating animals such as arboreal gliding mammals, the Colugo, Pot Bellied Proboscis Monkeys and crocodiles among others. It would be terrific to see these animals in a Night Safari that is offered by some agencies here.

As we cruised further along the Brunei River, the many 'floating' houses caught our attention as well as the water-taxis busy transporting their passengers from one place to another. I can say, the river itself was very busy! And then there it is, the grand 52m - high golden dome dominating the skyline - Sultan Omar Ali Saiffudin Mosque or known as the 'Floating Mosque', a powerful symbol of not only Brunei's religious roots but also its opulence. Alongside such grandeur is the capital's idyllic charm best captured by the water village, with its clusters of wooden school, stores and even dwellings built on stilts.

The end point of the cruise was exactly behind the royal palace, the Istana Nurul Iman which can be sighted from the cruise ship itself and on the left is another tiny island called 'Jong Batu', another folklore and legend of Brunei.

Sometimes we totally ignore the beautiful and simple things in our country because we are too carried away with the rapid development and our daily routine that we forgot all these kinds of breathtaking sceneries have existed and become part of us Bruneians.

Courtesy of Borneo Bulletin
.
.
Posted by e-borneo.com at 6:12 PM