Mysteries of the deep: Turtle tomb of Sipadan island 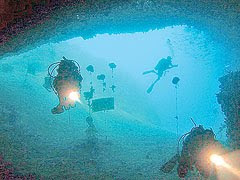 Divers explore the turtle tomb, while warning signs
are posted at the entrance of the cave 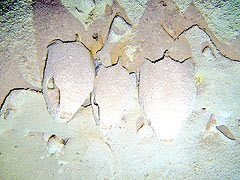 Turtle bones litter the sandy bottom of the cave,
claiming at least one life a year 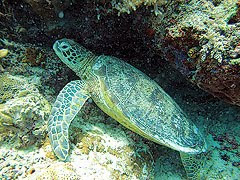 A turtle resting just outside the entrance of the tomb 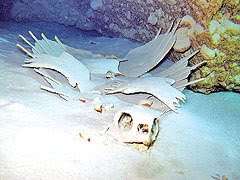 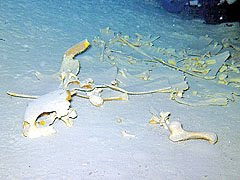 Scattered turtle bones on the cavern floor.
Turtles that get lost here hardly return to the surface

Photos courtesy of and Copyright to
Mohammad Abdullah and Brunei Press Sdn Bhd.

An unforgettable experience is a dive through the mysterious cave system of the turtle tomb, just off Sipadan island. A labyrinth of passageways runs through the reefs, 20m below the surface.

It's not for the faint of heart, as there are plenty of dead ends along the way to the tomb 200m from the entrance where turtle skulls and bones litter the bottom.

Warning signs indicate the dangers beyond the entrance and those going into the cave need to be fully equipped for cave exploration at the risk of getting lost in silts are real and imminent. The cavern, better known as the turtle tomb or graveyard, was just recently reopened after a recent fatality claiming the life of a diver.

The cave itself is one of the most beautiful coral caves that can be found anywhere in the world. Unlike the limestone caves, there are no stalagmite formations and the colours on the walls indicate the different water levels over time.

The white sandy bottom and bright colour ceiling enhanced the light of the flashlights used to navigate the caves. The shelves of the caves are homes to flashlight fishes, moray eels, spiny cave lobsters, shrimps and large snappers that often take advantage of a divers light to catch their prey.

A narrow passageway leads to the actual tomb itself where so many turtles have found their last resting place. Because the cave is particularly long, turtles and dolphins have ventured in and have lost their way. Without air, they eventually perish and add to the skeletal monuments in the cave.

The turtle tomb consists of several interconnected parts, with the cavern being the easily accessible part while the actual tomb is far inside and can only be attempted with an experience guide using full cave diving equipment.

The skeletons and the darkness give the cavern an eerie sight. On the entrance to the cavern, skull and cross bones signs warn divers of the dangers that loom in the cavern. Skeletons of dolphins and marlins can also be found in the caves.

The caverns can silt up very quickly reducing visibility and only those properly trained should consider entering. Taking pictures in the cavern is also a problem. One must move very slowly in order to not disturb the waters, or else the fine white sand would rise up and silt up the cavern, making it not only difficult to take pictures but also dangerous for divers because of the low visibility.

The mouth of the cavern is almost constantly 'guarded' by thousands of big-eye trevally, greeting divers as they enter the cavern. They also offer a beautiful end to the dive as divers exit the cave, swirling above in a kaleidoscope of colours.

Divers who want to explore the cavern must have at the very least two full air tanks and strong flash lights. They must also be highly trained and be accompanied by experienced cave divers or instructors who are familiar with the cave system.

Divers have a strong sense of curiosity where exploring and discovery is part of the attraction, though sometimes an overzealous curiosity can be fatal. One would have to remember their diving training, and should never dive without a dive buddy. The turtle tomb has claimed many lives, even divers that have panicked or lost their way in the catacombs of the cavern. Though the turtle tomb still remains a great fascination for divers and marine mammals alike, the alluring yet dangerous tomb will continue to attract visitors, as well as claim the lives of marine creatures.
Courtesy of Borneo Bulletin
.
.
Posted by e-borneo.com at 6:00 PM