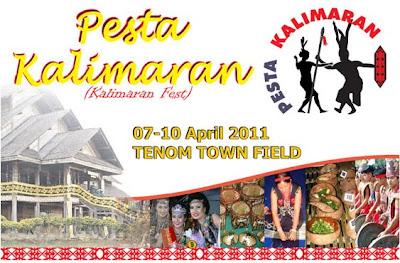 The word Kalimaran refers to the craftsmanship activities of the Muruts. It is derived from the Murut's words ralaa and alimar. Ralaa means young lady and alimar means hardworking, strong-minded, diligent and trustworthy. According to the story, there was a young Murut lady called Ralaa. She was a hardworking, strong-minded, diligent and trustworthy young lady. But her brother Yolomor had to sacrifice her for the benefit of their community. Before she was sacrificed she managed to produce many handicrafts like the Tikar, Silaung, Tikalis, Buyung, Lintoyog and Onot by using raw materials like bamboo, rattan and bamban. Ralaa ended her kalimaran by weaving cloth, sampoi (scarf) by using thread, which was produced from Timahan roots. Finally, Ralaa was sacrificed by Yolomor to get seeds for his cultivation farm.

Sabah state government has adopted Pesta Kalimaran as a state level celebration in the year 2003. First state level Pesta Kalimaran was on the 4th and 5th April 2003. Since then it is celebrated in April every year at Sabah Murut Cultural Centre. It is co-organised by Sabah state government through Sabah Cultural Board and Sabah Murut Association in collaboration with Tenom District Office. For this year’s (2011), some of the activities have to relocated to be Tenom town due to the ongoing upgrading works of the Murut Cultural Centre (please refer to the Kalimaran detailed programme). See you there!

Sabah Murut Cultural Centre (Pusat Kebudayaan Murut Sabah) is a cultural centre for the Muruts of Sabah. It is located at Kampung Pulong, 13 km from Tenom Town. The construction of the unique building started in 1994 and completed in 1996. The construction cost was more than twelve million (Malaysian Ringgit). It is unique in a sense that the building itself is a manifestation of the most aspects of the Muruts' culture. What's more, it is the biggest Belian (hardwood timber) building in Borneo (popularly known as 4B building)!
Source: Sabah Cultural Board

NOTE: Photo Copyright to Sabah Cultural Board
.
.
Posted by e-borneo.com at 6:06 PM