Do You Know: Pygmy Elephant 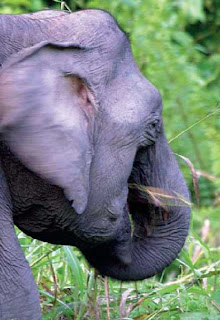 We have heard so much about the Borneo Elephant sightings in Tabin Wildlife Sanctuary and the Kinabatangan area; but most of us have not been fortunate enough to see them or even visited the areas mentioned.

Be that as it may, the Borneo Pygmy Elephant or Elephas maximus borneensis is a subspecies of the Asian Elephant and found in East Sabah and extreme north Kalimantan.

The have been conflicting stories and theories about the origin of Borneo elephants.

Some people believed that they have always inhabited North Borneo and indeed tales of elephants sightings have been related by our grandparents. The other theory is that they were imported into the State for some reason.

However, scientific reports in 2003, has discovered that this elephant could have been in this land for 300,000 years!

It seemed that the elephant got separated from the main herd when land bridges which linked Borneo to other Sunda Islands and the mainland disappeared during the Ice age some 18,000 ago.

During the isolation, the Borneo Elephant evolved into a smaller version of its former self and acquired longer tales and straight tusks. It is also quite docile, leading people to believe that it descended from a domesticated elephant.

There are also pygmy elephant in India.