The West Mouth of the Great Cave 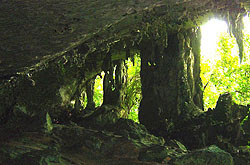 Stalactites and stalagmites inside Trader's Cave 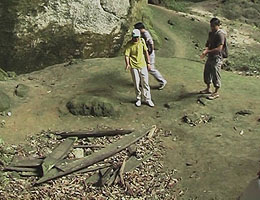 Looking at the remains of the 'death ships'

Niah National Park, 110 kilometres from Miri, Sarawak, is one of the oldest parks in Malaysia. It is home to the popular Niah Cave or Gua Niah. The park has 31 square kilometres of lowland forest and limestone outcrops, the highest of which is Mount Subis, rising to nearly 400 metres.

Within the Great Caves of Niah National Park was found the oldest human remains in South East Asia, dating back some 40,000 years ago. Inside these caves, archeologists and other explorers have discovered artefacts such as pottery, stone tools and ornaments, including a set of red-hematite wall painting depicting hunting and fishing. These stick-like figures were believed to have been drawn 1,000 years ago by an unknown artist. The mysteries remain the pulling factor for all tourists and visitors to the place.

On a fine sunny morning in December, I went on my first trip to Niah with a group of teachers and students. Leading us was Sani Mahali, an experienced guide, who works part-time at the park. We had planned this trip several months in advance and now, finally, we were embarking on our great new adventure to the cave.

Filled with anticipation and excitement, we quickly crossed Niah River by boat and made our way to a wooden walkway. Getting to the cave was tricky. The plank walkway was slippery due to overnight rain, that slowed us down. We were rewarded with the sight of a macaque monkey, a squirrel and some birds and butterflies.

After trampling for more than an hour through the dense rainforest, we reached Trader's Cave. In the dim interior are roofless huts where bird nest collectors inhabit during the collecting season. Here, they would congregate and sell their harvests to merchants. Under the slope of the cave roof are stalactites and striking green algae, stalagmites and ferns growing upwards from the floor.

A few minutes later, we see the West Mouth of the Great Cave, where a human skull called 'Deep Skull', that yielded a radiocarbon date of around 40,000 years old, was discovered.

Over 60m high and 250m wide, West Mouth is one of the world's most spectacular cave entrances leading to an even larger chamber within. Here, the smell of bat droppings (guano) intensifies as the path leads around extraordinary rock formations. The sound of our voices, dripping water and high-pitched screams of swiftlets and bats were magnified considerably.

As we went further inside the guano-covered walkway, we switched on our torches, and put on our hats and raincoats to avoid getting guano on our hair.

After a 30-minute exploration of the Great Cave, where we climbed stairs and clambered over some rocks, an exit that led us briefly into the light before we entered another cave: Painted Cave. Despite light streaming from an opening at the far end of the cave, we found it hard to distinguish the wall paintings that give this cave its name. Given that the cave is now fenced off to prevent vandalism, it was even more difficult for us to see the paintings. From afar, we spotted one or two drawings that looked like animals.

Inside the Painted Cave, we found some pieces of wood, believed to be remains of the boat-shaped coffins or 'death ships' used by early Sarawak communities. Although the burial site at the painted cave is far more recent than those at the Great Cave, it offers a clear insight into the development of the traditional religions of Borneo.

Courtesy of Borneo Bulletin Sunday
Posted by e-borneo.com at 6:19 PM