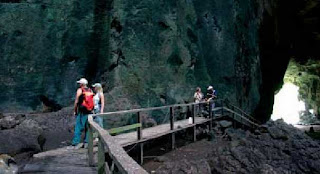 Gomantong Hill is the largest limestone outcrop in the Lower Kinabatangan area, and contains at least nine caves. For centuries, the Gomantong Caves have been renowned for the valuable edible birds’ nests made by two of the four species of swiftlets that roost in the caves. During the harvesting months, visitors may be able to witness the birds’ nest collectors in action. This is an age-old tradition and the trade history of birds’ nest spans several hundreds of years.

Gomantong consists of two cave complexes, Simud Hitam and Simud Putih. Simud Hitam is the main cave, a five-minute walk from the Registration Centre. Along the way to the cave, enjoy the beautiful green surroundings and, if you are lucky, you might even catch a glimpse of a macaque or two.

A boardwalk inside the cave makes exploration an easy task. Be sure to have a torchlight ready. Once inside, be amazed at the 90-metre high cave roofs, which is where the swiftlets’ nests are often found. Exploring Simud Putih is for more the more adventurous, requiring rock climbing skills. The ‘white saliva’ birds’ nests found here are more valuable as they are more difficult to collect.

The birds’ nests harvesters are individuals who have nerves of steel and skills honed through years of experience. Dangling precariously from the narrow network of ladders is not a task for the faint hearted! It is not surprising that there are only a few experienced individuals who are very much in demand by people and communities that hold the Government’s harvesting licenses. Edible birds’ nests are protected under the Birds Nest Ordinance and the Forest Enactment. Heavy fines and penalties are imposed on unlicensed collectors.

Generally, two collections are made. The first takes place early in the breeding season before the swiftlets lay their eggs. The birds then make another nest in which they finally lay their eggs. After the young have fledged, the second collection is made. Care must be taken to assure that the nests are collected only after the young swiftlets have abandoned these nests.

Besides observing the exciting display of skill and courage by the birds’ nest harvesters, another activity for keen naturalists would be to watch the spectacular display of over 2 million or so resident bats as they spiral out for their evening feed. 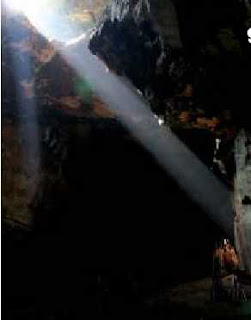 This usually occurs between 5:15pm and 6:15pm but rain may delay or ‘cancel’ this spectacular event. As the bats leave, the swiftlets are usually beginning to make their way back to the caves after a day’s foraging. The changing of ‘shifts’ between the bats and birds makes quite a fascinating scene! Look out for the Bat Hawks that linger not far from the scene, as they prey specifically on the bats as they leave their roost.

How to get there

Take a 45-minute flight or enjoy a leisurely 6-hour drive from Kota Kinabalu to Sandakan. From Sandakan town, make arrangements for a journey to the Kinabatangan region, which is approximately 2 hours by road.