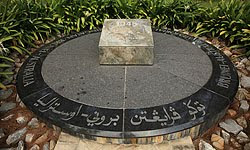 Photos courtesy of and Copyright to Sham and Brunei Press Sdn Bhd.
By Sham

Unknown to many, unless if you are a frequent visitor - Muara Beach, some 25-minute from the capital, has a historical monument erected there.

This is to commemorate the first arrival of the Australians to the Sultanate in 1945, which was back then code-named as the green beach.

The site is now officially named as the Tugu Peringatan Brunei-Australia or rather simply Brunei-Australia Memorial Monument, with an information board being placed at the entrance to provide visitors with some historical background.

The information board partly states, "The force that landed at Muara Beach was the 2/17th Australian Battalion Group. It included combat and support troops drawn from several units.

"The Australians advanced from here to Brunei Town (now Bandar Seri Begawan) and south coast along and beyond the Seria oilfields." Lieutenant Colonel John Broadbent, Commanding Officer of the 2/17th Battalion, reported, "Everywhere we have been enthusiastically received by the local inhabitants irrespective of their nationality."

Another block of memorial stone also written with '1945 Dalam Ristaan or In Memory' is laid on a tile-covered circular concrete slab.
Courtesy of Borneo Bulletin
.
.
Posted by e-borneo.com at 6:19 PM

Email ThisBlogThis!Share to TwitterShare to FacebookShare to Pinterest
Labels: Muara