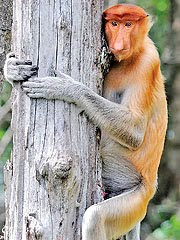 Unlike in other parts of Borneo where the Proboscis monkeys
are found in sanctuaries or reserves, the colony of
Proboscis monkeys in Brunei lives relatively close to civilisation 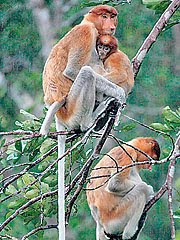 Some groups of Proboscis monkeys live near their human neighbours 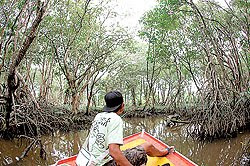 Photos courtesy of and Copyright to Mohammad Abdullah and
Brunei Press Sdn Bhd.

There are many species of animals found only in Borneo, and one such animal known locally as the "Burak" or "Bekantan" (Proboscis monkey) is one of the best kept secrets in Brunei Darussalam.

I once spied on a colony of Proboscis monkeys during an eco-tour in Sabah in 2002. Little did I know that we, in Brunei Darussalam, have our own colony of rare long-nosed pot-bellied celebrities which are also known as 'Orang Belanda' (Dutchman) due to their long nose and pot belly.

It was only a few years ago that Brunei ventured into eco-tourism and started tours to view these magnificent unique creatures literally in our own backyard.

Unlike in Sabah and other parts of the island of Borneo where the Proboscis monkeys are found in sanctuaries or reserves, the colony in Brunei lives relatively close to civilisation. In fact, some houses built close to the banks of mangrove swamps regularly get visits from the Dutchman. Making these endangered animals an almost permanent fixture in these residential areas, co-existing peacefully with their human neighbours.

These endangered animals are largely restricted to living in coastal areas and along rivers where they live only in lowland habitats such as coastal and riparian habitat, many of which are flooded by tides. It prefers dipterocarp forests, mangrove forests and riverine forests.

This species is rarely found more than a kilometre from water sources. It is perhaps the most aquatic of the primates and is a fairly good swimmer, capable of swimming up to 20m. It is known to swim across rivers.

Proboscis monkeys generally live in groups consisting of an adult male, some adult females and their offspring. Other groups also exist such as all-male groups. There are some individuals that are solitary, most of which are males.

The Proboscis monkey is assessed as endangered in the IUCN Red List of Threatened Species and listed in Appendix I of CITIES. Its total population has decreased by more than 50 per cent in the 36-40 years to 2008 due to ongoing habitat loss and hunting in some areas.

Brunei's Proboscis monkeys are no different. Though they are not hunted, their habitat is endangered due to expanding residential areas and urban development, which threaten the mangrove forests.

Unless we do something to help preserve these animals by creating a reserve or sanctuary, then we are sure to lose one of Brunei's rare treasures.

To view these magnificent creatures, just pop down to the jetty and take one of the many tours that offer a river cruise of the Brunei River where tourists can see the Proboscis monkeys in their habitat.
Courtesy of Borneo Bulletin Weekend
.
.
Posted by e-borneo.com at 6:19 PM