A Review - Injin Puput: Passage to the Heart of Borneo 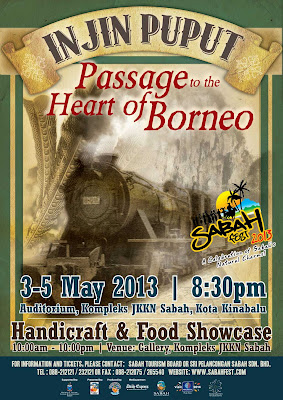 I was lucky enough to get a free media pass to attend the media preview on the 3rd of May at Sabah’s JKKN Complex, from Nova, who was so supernova enough to give me one. I was ecstatic because I’m keen about the Sabahan culture that never cease to fascinate me.

Injin Puput tells the story of a grandfather, Aku Arusop and his grandson, Aaron going on a train ride along the west coast of Sabah. While at it, Aki Arusop reminiscences his father, Aki Gounon’s love story with a Chinese girl, Mei Ling.

The musical started with a Murut warrior having a premonition of the arrival of British which was also a forecast of the  appearance of Vulcan trains which is extended into the heart of Sabah.

Watching Injin Puput gave me a revelation, a reminder of how beautiful the cultures we have in Sabah. It was also an educating experience as I’ve got to learn some of the customs/traditions or rituals that I’ve never seen or heard before, especially the Bosilat Mandung – Mandung and the Sazau Modsuhung of the Kadazans of Papar.

It would be unfair though, if I were to compare this production with the musicals and plays I’ve seen in Istana Budaya.  There were some things I thought in Injin Puput were ‘off’.

For instance, I thought that the screen which portrayed the visuals were over used that to me, seemed to be sort of a short cut to create the scene’s setting. If physical props have been used to create the setting, it would give a sense of awe and would be more realistic compared to just depending the visuals on the screen.

I’m not going to touch on the choreography of the traditional dances because my knowledge is not to that extent. But I did find that the fighting choreography during the scene with Mei Ling’s brother was quite weird and funny. At the back of my mind was ‘Ah, itu seja? Lawan, mati and then lari?’. It was just plain to me and I didn’t give any excitement of ‘wow, these dudes are really fighting’.

Continue reading (Incl. Pics) at: Injin Puput: Passage to the Heart of Borneo
.
.
Posted by e-borneo.com at 6:29 PM