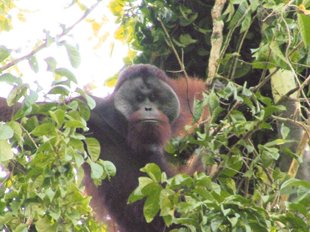 All causes of further habitat fragmentation or reduction have to be
halted in the Kinabatangan, if we want to maintain a healthy
orangutan population, like this male orangutan (above).
KOTA KINABALU: The Sabah Wildlife Department said activities that cause further fragmentation or reduction of orangutan habitats must be stopped in Kinabatangan to ensure a healthy population for the primates.

Its director, Patrick Andau said there was already sufficient information to model the future survival of orangutans.

“The team has now gathered enough valuable scientific information on the demographics, genetics and density of the orangutan population in the Kinabatangan to be able to model its future in the short, mean and long-term,” he said after a half-day workshop recently.

It was organised by the Sabah Wildlife Department, Universiti Malaysia Sabah, the non-government organisation HUTAN and Cardiff University (UK), and funded by the Darwin Initiative for the Survival of Species, UK.

“Furthermore, and most importantly, all causes of further habitat fragmentation or reduction have to be halted in the Kinabatangan, if we want to keep maintain a healthy orangutan population.

“While the Sabah Wildlife Department is looking at ways to connect the Lower Kinabatangan orangutan population to the populations of Segaliud Lokan/Deramakot (North) and Ulu Segama/Malua (South), it will, at the same time, conduct managed translocations,” added Andau.

Professor Michael Bruford, from Cardiff University, UK said they had specifically tested the potential effects of managed translocations and of establishing forest corridors along the northern and southern banks of the Kinabatangan river during a modelling exercise.

“Our models incorporated information on orangutan life history, the number of individuals estimated in each forest fragment by ground and helicopter surveys carried out by HUTAN and the Sabah Wildlife Department, the current genetic “health” of the population, and potentially catastrophic events such as severe drought and El Niño.

“Therefore, the model allows us to test the impact of different management actions and select those which will achieve a self-sustaining orangutan population,” he explained.

A conservation geneticist at Cardiff University, Dr Benoit Goossens said there are approximately 1,000 individuals in 11 genetically isolated sub-populations in the Lower Kinabatangan today.

“The model shows that if nothing is done, most of these sub-populations will be extinct in the short and medium terms (less than 50 years),” he said.

Co-director of the NGO HUTAN, based in Sukau, Kinabatangan, Dr Isabelle Lackman-Ancrenaz stressed on the need to reconnect sub-populations by creating forest corridors between existing forest fragments to avoid extinction.

“But establishing these corridors is a slow process and extinction may still occur in the meantime. Only a combination of forest corridors and translocations will succeed in eliminating all extinction risks and control inbreeding in the Kinabatangan orang-utan population,” she said.

“Another conclusion of the modelling exercise is that the size of the available habitat has to be increased to allow the overall population to grow to a viable size,” Dr Lackman-Ancrenaz added.

“The results presented by the team are very important if we want to seriously manage the orangutan population in the Kinabatangan, a top priority for the department”, says Laurentius Ambu, deputy director of the Sabah Wildlife Department.
Source:New Sabah Times
Posted by e-borneo.com at 3:12 PM