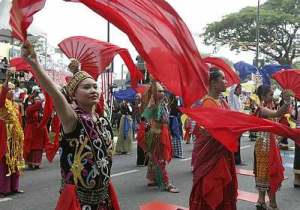 Children from over 30 schools dressed in costumes of native Sarawa
communities waiting to join the parade at Padang Merdeka in Kuching. 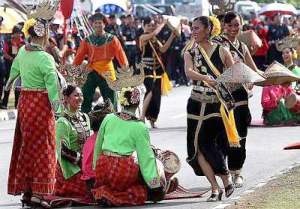 KUCHING - Malaysia celebrated its 49th National Day yesterday in Kuching with a glittering parade and procession involving all strata of its multi-racial and multi-religious society.

While maintaining the theme, KeranaMu Malaysia, which reflects the people’s gratitude for the peace and rapid development that they enjoy, this year’s celebration also carries a sub theme, Misi Nasional Penjana Wawasan (National Mission Generates Vision), aimed at highlighting the five main thrusts of the 9MP.

Padang Merdeka in the town centre came alive with spirited declarations pledging loyalty to the nation, lively performances by people in colourful attire, uniformed bodies and bands as well as a parade and procession which ended with a cultural performance by members of the Integrated People’s Com-ponent.

Leading the parade was the Merdeka component comprising a brass band and a National Service contingent carrying a giant Jalur Gemilang and state flags.

This was followed by the sub theme component and ended with the Security and Peace component.

In KOTA KINABALU, some 10,000 people thronged a one kilometre stretch along the seaside at Jalan Tun Fuad Stephens to witness the state-level Merdeka Day parade that kicked off at 7.30am.

The Yang Di Pertua Negri Tun Ahmadshah Abdullah and Chief Minister Datuk Musa Aman were among the dignitaries at the parade that comprised of 95 contingents.

Many in the crowd waved small Jalur Gemilang flags as the contingents walked past. Among the contingents was a cultural troupe whose members performed a series of traditional dances of Sabah’s ethnic communities including the sumazau and limbai.
Source: The Star