Rhino in the wild caught on video in Sabah 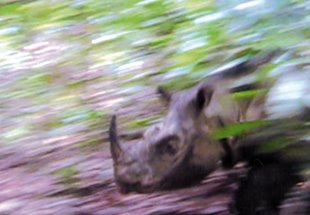 The first picture of the reclusive Sumatran rhino taken in the wild here in Sabah.
Photo Copright to New Sabah Times.

KOTA KINABALU: A Sumatran rhinoceros was sighted and photographed in its natural habitat for the first time in Sabah, heartening rhino conservationists in the state.

Rangers from SOS Rhino patrol unit were out tracking the animals when they came across a healthy male rhino in the wild and managed to capture it on digital camera using the video mode.

Members of the media were given the opportunity to view the video clip, which lasted less than 10 seconds. The visual shows the young rhino scurrying away, seeing the rangers.

“This is the first time in Malaysia that we managed the capture the rhino on video. Meaning to say that, they are not really wild now because they are coming out to occupy more areas in the forest,” he said.

To ensure the safety of the rhino especially from poachers the location of the sighting will not be disclosed to the readers.

On the significance of the discovery, he said the department had just finished its task of surveying the rhino population in Danum Valley and they had found at least 17 rhinos in the area.

“Now, we are planning to conduct a full-scale survey in Tabin Wildlife Reserve in November this year,” Laurentius said.

In the past, he said, there was plenty of skepticism about the rhino programme, as the only evidence that trackers and conservationists had were footprints and dung.

“Now, since we have recorded one on video, we have something to prove to the people,” he said. “We reckon from the sighting of the young rhino that they are now breeding. However, we can only determine the actual number when we conduct the survey. The prospects for the rhino are quite positive in Tabin because you can see them running around, which is a good indicator.”

SOS Rhino programme officer Dr MS Thayaparan said the sighting, along with rare photos and video documentation of the rhino in its natural habitat, are indeed very encouraging.

“We have been tracking these animals here in Sabah for almost 10 years now, and although we have seen tracks and signs of the rhino, this is the actual first sighting of a rhino in the wild. We are excited about the photos and video clip as it also helps us determine the sex of the animal and its health condition in its natural habitat, something that we could only guess at before,” he said.

“This is the good news… we can receive more funding from Save the Rhino International to pursue our programme,” he added.

Dr Schaffer concurred, saying that the video means there is hope for the species—and returns for the initial investment that the organisation made in it.

“The Sabah Wildlife Department has made a significant investment in the rhino since the ’80s. The animal is so special and so unique that it took millions of ringgit and years to understand,” she said.

She said the department built sophisticated facilities for the study of the rhino: They were the first to develop breeding techniques that ultimately resulted in the birth of the first rhino calf born in captivity in 100 years.

“But now,” she said, “it will take another substantial long-term investment to continue to sustain and promote the initial investment. (It will take) commitment, not just by the government, but also by the public, business and education sectors—commitment by everyone—to not let a world heritage species become extinct in our lifetime. It will take funds, it will take materials, and it will take determination.”

She added, “This is a viable fight even for the burgeoning tourist industry—with no promotion, this animal has brought RM24 million to the economy of Sabah. It is an untapped economic resource as an awe-inspiring experience.”
Courtesy of New Sabah Times
Posted by e-borneo.com at 5:16 PM