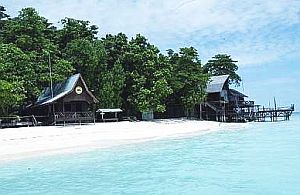 HIDEAWAY: Some divers say these empty chalets could
be rehabilitated and used by divers and day-trippers. 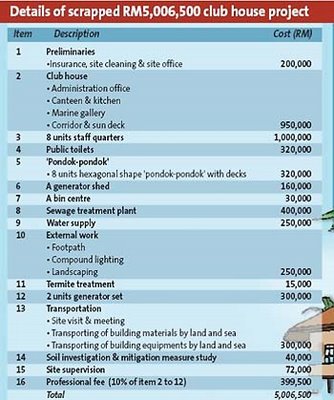 KOTA KINABALU: Should the RM5mil clubhouse project on Pulau Sipadan be allowed to continue?

This is a decision that Chief Minister Datuk Musa Aman, who is scheduled to visit the diving haven today, will have to make soon.

Last month, the state government came under fire, after the Prime Minister voiced his anger over the recent destruction of the island’s corals.

On May 14, a contractor’s barge carrying building materials ran aground on the reef flat during a storm, sparking off an outcry by divers who questioned the rationale for a concrete project on the eco-sensitive island.

This was echoed by a Semporna-based senior security officer and others who felt that the wooden structures abandoned by resort operators on Jan 1, 2004 could be rehabilitated and used by Sipadan divers and visitors.

The officer said the existing facilities on the island should be upgraded for divers, day visitors and Sabah Park and security personnel stationed on the island or alternatively boats with toilet and washing facilities could be used to minimise any danger to the island.

“Instead of spending the money on structures, it could be put to better use to keep the island in its pristine natural state,” said a university lecturer, who lamented that in most instances, tourism promotion was centred on projects and not the upkeep of nature.

However, several divers and dive operators said the now empty resort chalets could no longer be used as toilet and sanitation facilities were beyond repair.

Favouring the clubhouse construction, a consultancy report in June argued that the clubhouse connecting to the Drop-Off Point Jetty in Sipadan would be uncluttered and have adequate chalets or pondok (shelters) for resting.

It said all supporting facilities such as quarters, public health amenities and water supply would be situated behind the clubhouse. The report stated that care would be taken to preserve all trees and vegetation, with up-to-date sewage treatment technology incorporated.

It said no ground water would be extracted from the island and only environment-friendly materials would be used for the clubhouse.

No heavy machinery was also to be used on the island and the tide levels had to be observed for the appropriate timing of unloading of building materials.

Divers who witnessed the May 14 barge saga said that without adequate supervision by Sabah Parks and other competent authorities, any construction work on Sipadan could lead to another round of coral and marine life destruction.

If a decision was made to resume work on a modified clubhouse project, they said, the project should be monitored by an independent environment group and heavy penalties imposed for any possible damage to the eco-system.
Source: The Star