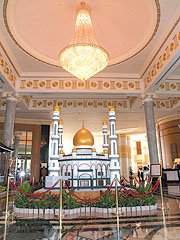 An impressive replica of the Jame' Asr Hassanil Bolkiah Mosque now stands in the Empire Hotel & Country Club Lobby to welcome guests to the upcoming Aidilfitri celebration in the country.

The replica which stands breath-takingly tall in its grandeur has been intricately detailed by the hotel's Engineering team in a splendid work of art.

The gold embossed dome highlights the luxurious details of the magnificent mosque in all its glory.

The model made mostly out of timber and Perspex with plaster for its domes will be on display until the end of the Aidilfitri festivities.

The luxurious chandelier that hangs right above it gives a soft glow to the creation, presenting a grand view of the coming festivities.
Courtesy of Borneo Bulletin Weekend
Posted by e-borneo.com at 5:49 PM