Labuan - Land of History and Heritage 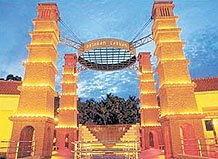 Labuan Birds' Park is home to many Borneo bird species. 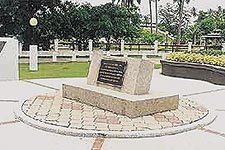 The historic site of Surrender Point. 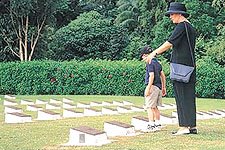 Visitors at the war memorial. 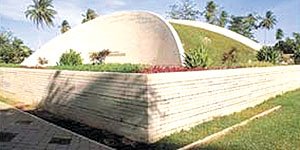 The Peace Park, a stark reminder of the war.

Only eight kilometres or a twenty minute boat ride from Menumbok, a small fishing town in Sabah is the Federal Territory of Labuan.

Each year around November, scores of veterans from the Second World War and their family members will usually make a pilgrimage of sorts to Labuan's historic Memorial at Jalan Tanjung Batu.

Apart from the memorial, the Labuan War Cemetery is also visited very regularly by War Veteran groups, especially from Australia, who have included Labuan as an important destination on their battlefield tours circuit.

On the first Sunday of November every year, a service to mark Remembrance Day is held there and is attended by locals and foreign visitors.

The place was constructed, and is maintained by the Commonwealth War Graves Commission, where 3,908 graves of soldiers who either died in battle or captivity lie there.

Most of the soldiers were Australians and British with some from the Punjab Signal Corp, New Zealand as well as a few locals.

In February 1945, the Japanese, apprehending an Allied landing in the Sandakan area in Sabah, started to force prisoners to march on to Ranau, in what has come to be known as the infamous Ranau Death March.

Hundreds perished along the way and those who were left behind at the Sandakan POW camp died or were killed, with many of the dead reburied at Labuan.

On June 10, 1945 Allied troops landed at Brown Beach at Tanjung Purun to begin the liberalisation of Borneo from the Japanese.

Prior to this, Labuan town was heavily bombed aerially to flush out the enemies, with most of the buildings destroyed.

The remains of the Allied troops were gathered from all over Borneo to be interred at the cemetery. The graves lie in long neat rows all bearing a plaque, mostly identified, many not, but 'known unto God'.

The lawns are beautifully kept and visitors will appreciate the peace and tranquillity of the place as they seek to understand the untimely deaths of so many brave young men.

Next to the Peace Park is Surrender Point, another historical place of interest, where the 32nd Japanese Southern Army surrendered to the 9th Division Australian Imperial Forces on September 9, 1945. This led to the end of World War II in Borneo.

The Japanese arrived at Labuan on January 1, 1942, less than a month after they had started their campaign in Malaya at Kota Baru and took formal possession of the island on the January 3, after facing no resistance.

They occupied Labuan for four years, even renaming it Pulau Maida, or Maidashima after General Maida, the Chief Commander of the Japanese forces in Borneo. He was on his way to Labuan from Sarawak to open the airstrip there when he died in an air crash at Bintulu.

The airstrip was built by the Japanese who found it was a good location for their operations in North Borneo.

And for Labuan, the end of the Japanese Occupation came abruptly with the retaking of the island by the Allied forces.

The capture of Labuan was seen as essential for recovering supplies of oil, rubber and timber from the mainland of Borneo besides serving as a base to help the Allies recapture Singapore. These days, downtown Labuan are pedestrian areas to relax.

Wrought iron seats and ornamental lamp posts, together with flowering plants and shrubs make a pretty sight while there are many eating places which specialise in Malay, Chinese or Indian food, as well as popular fast food outlets.

The busy waterfront area is always a hive of activity serving as landing berths, as well as the Customs and Immigration departments.

The barter trade is carried out in this area and glass noodles seem to be a very popular item with the Filipino barter traders.

The main thoroughfare in downtown Labuan is Jalan Merdeka. At the eastern end of this main road are the Sheraton Hotel, Waterfront Financial hotels and the soaring Financial Park complex.

Sharing the downtown Labuan skyline is the Masjid Jamek An'nur, a huge Muslim mosque of futuristic design with two minarets reaching for the skies.

There are a few houses of colonial design fronting the Town Padang, with one of them featuring a high gabled roof of orange tiles with eaves and cool recesses.

Four old Flame of the Forest trees stand in a square area, casting a shade over park benches and commemorative stones.

They were planted by the Chinese, Malay, Indian and European communities in Labuan in 1953 to mark the coronation of Queen Elizabeth 11.

There is an interesting granite slab with inscriptions done by sailors on Captain Rodney Mundy's ship 'Iris' on route to Labuan from Hong Kong. It was intended for the handing over ceremony of Labuan by Bruneians.

During the Japanese Occupation, it was tossed aside by the Japanese but was later retrieved and remounted but is amazingly in good condition despite all this.

Located near the Chimney at Tanjung Kubong is the Labuan Birds Park, with three large dome-shaped cages surrounded by beautiful landscaping. The park is home to many species of Borneo birds most likely to be encountered by bird watchers.

There are plans to collect a good percentage of the 580 species of birds found in Borneo's diverse habitats, from mangroves along the coast to forest in the mountains.
Courtesy of Borneo Bulletin Sunday
Posted by e-borneo.com at 12:08 PM