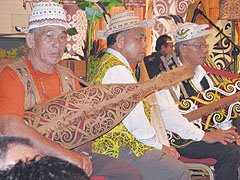 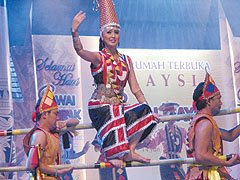 Traditional dance performances by Dayak beauties at the festival 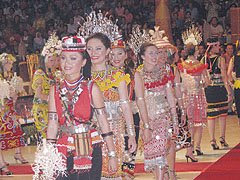 The national-level Malaysia Gawai Dayak Open House 2008 celebration held in Kuching recently was the ideal experience to explore and learn the unique cultural heritage of the many ethnic groups in Sarawak.

It is the iconic celebration of the Dayak communities in the state to showcase their respective cultural performances on stage with their traditional colourful costumes and dance.

The mesia was invited by Tourism Malaysia under the Mega Familiarisation Programme to witness the colourful celebration of the Dayak community.

Other Mega Fam groups were from Australia, New Zealand and Canada.

The event was declared open by Head of State Tun Datuk Patinggi Abang Muhammad Salahuddin on behalf of Yang di-Pertuan Agong Sultan Mizan Shah by taking the lead in a mock winnowing of rice on stage.

The festival is celebrated annually and is one of the highlights in the Sarawak tourism calendar of events. The festival was first held in 1987.

The Gawai Open house is usually held in June just after the actual Gawai Dayak celebration on June 1.

The festival brought together the culture of the ethnic groups of the Dayak communities in the state. Altogether, there are 30 different ethnic groups in Sarawak.

Visitors who attended the event had the opportunity to take a closer look at mini traditional longhouses to portray the different Gawai celebrations of each Dayak ethnic group.

There was also a mini exhibition on the wide range of handicraft items including Iban traditional textiles Pua Kumbu, decoration and accessories of the ethnic groups.

Gawai Dayak is the most popular festival among the Dayaks in the state. It is the festival to mark the end of the padi harvesting season and the beginning of a new one. The native ethnic groups of Sarawak comprise the Iban, Bidayuh, and the Orang Ulu. The Orang Ulu consists of about 24 sub-groups - Kayan, Kenyah, Kelabit, Lun Bawang, Bisaya, Penan, Tabun, Tagal, Saan and Punan Busang.

Courtesy of Borneo Bulletin Sunday
Posted by e-borneo.com at 6:59 PM