The meaning behind 'Kadazan' & 'Dusun' 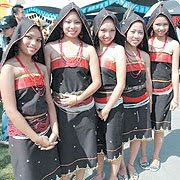 Girls looking proud with their traditions 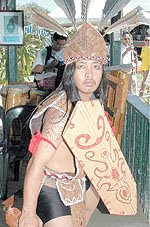 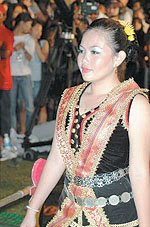 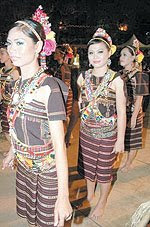 Dressed up in their finery 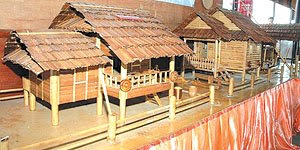 The recent Tadau Kaamatan 2008 celebration held at Hongkod Koisaan in Penampang district and the Open House Malaysia held at Padang Merdeka in Kota Kinabalu City showed the celebration was very merry and many things told audiences and tourists about the Kadazandusun Culture.

However, some international and neighbouring communities still do not know the origins and meaning of the terms "Kadazan" and "Dusun".

Some of the more popular explanation and meanings attributed to it where some people believed that the word came from "Kakadazan" which means 'town'. Others believed that it originated from the word 'kedai' which mean 'shop'; thus the word 'kedaian' or 'Gadaian' which supposed to mean 'people of the town'. Others believed that 'kadazan' come from 'Kedayan'. The name of an ethnic group, residing mainly in Brunei in the Temburong district, at Kampong Salambigar, Kampong Tanah Jambu, Kampong Jerudong, Kampong Katimahar, Kampong Pangkalan Batu, Kampong Junjongan, Kampong Lumapas in the Brunei and Muara District, Kampong Sinaut in the Tutong district, Papar, between the districts of Sipitang and Beaufort at Kampong Inuman and Bukit Nenas, Labuan Federal Territory and Merapok, Punang in Lawas, and at Kampong Batu Niah, Sibuti, Bekenu in Miri Sarawak. They are not usually identified as part of the 'Dusunic' people. Some believed that it was coined by certain politicians, and finally others believed that it means 'the people'.

The first explanation that the term 'Kadazan' came from 'kakadazan'. 'Kakadazan' in the Tanga'a dialect means 'town'. Did Penampang and Papar districts Kadazan really name themselves 'town'? If so, why? Presumably, part of these factors is the belief that the word 'Kadazan' was coined in the late 1950s and 1960s. To judge the merits of this explanation, historians and authors have to consider the historical background of urban development in the Penampang District. In the fifties, there were only two towns, namely Donggongon and Kasigui. Donggongon town had about 20 shops arranged in two rows on each side of the road, and Kasigui had about 10 shops build on one side of the road. Except for one shop, all the other shops in both Donggongon and Kasigui were owned by the Chinese. The Penampang Kadazan were scattered in numerous villages in the Penampang District and still are. How come these people, who never stayed in the towns, suddenly decided to call themselves after 'town'? Those who proposed these factors or views have not come up with answers.

The second explanation for the origin of the word 'Kadazan' was that it derived from the word 'Kedaian' from the Malay word 'Kedai' which means 'shop'. To consider the merits of this view, one will have to look at the same points raised above regarding the word 'kakadazans' being the source of the word 'Kadazan'. These peoples have no shops and did not live in them, yet they were supposed to have named themselves 'shops'. Why? Those who proposed this view have not come up with reasons as well.

Courtesy of Borneo Bulletin Weekend
Posted by e-borneo.com at 9:01 PM