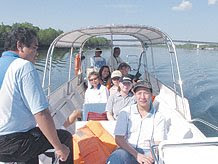 Getting ready for the dolphin watch 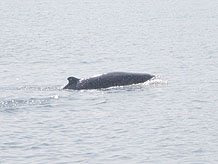 It's not a power boat but a dolphin 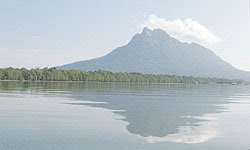 One doesn't have to travel afar to see wild dolphins. Just fly to Kuching and the best time to watch the Irrawaddy Dolphin is between the months of April and July, especially in Santubong, Salak and Buntal river estuaries. It takes about 40 minutes by car to reach Damai.

A group of journalists from Brunei arrived at the Boat Club jetty at 9.30am in Damai, where the travel agent (CPH Travel) boat was waiting for them.

On the way down to the boat, they stopped to observe the mudskippers fighting with each other at the shallow water of the riverbank and then came a group of blue-fiddler crabs, which are rarely seen.

The media group cruised slowly along the river in a motorised boat while waiting for dolphins to show up in the water. They were really impressed with the beautiful view of the blue waters and mountain of Mt Santubong.

While cruising further down the river that is about three kilometres from the jetty, had they been lucky, they might have seen other wildlife species in the region such as crocodiles.

Mr Koronikal, the tour guide said all the mouths of major rivers in Sarawak have crocodiles.

"Are there many crocodiles in Brunei?" he asked. The media people answered, "No but we have lot of 'Buaya Darat' (land crocodile)," and they all laughed.

The Irrawaddy or Snub-fin dolphins originally came from Irrawaddy Delta in Myanmar. They are usually found at the river mouths of Australia, Papua New Guinea and Malaysia.

For the journaliststs to capture a good picture of the dolphins was not easy because they just came up and within seconds disappeared into the water. But one of them managed to capture a few shots.

They continued to cruise close to the river mouth, where many fishermen were carrying out their daily activities.

Here, they saw a group of dolphins swimming very close to the fishermen. The dolphins could get easy food (fish) thrown by the kind-hearted fishermen into the water.

The dolphins may look gentle but they are wild animals because they are not trained and cannot be touched, said Mr Koronikal.

After spending about three hours cruising, the journalists returned to the jetty, as it was almost time for lunch at the Sarawak Cultural Village.

On the way they also cruised through the mangrove to look for Proboscis monkeys and crocodiles but they never showed up. Maybe a good time to meet them is in the evening.

They also passed by an isolated village called Kg Salak. The village has no water supply and the residents have to depend on rainwater for washing and drinking. There is no electricity but they have power generators.

Most of the residents are fishermen. The government is trying to help the isolated community by building a mosque and school as well as providing water tanks.

Courtesy of Borneo Bulletin
Posted by e-borneo.com at 6:41 PM