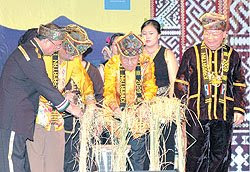 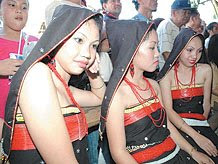 Girls from the Lotud community 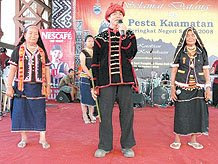 A ritual song performed by the elderly 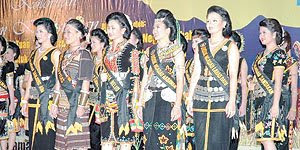 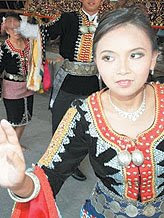 A traditional dance from the east coast of Sabah 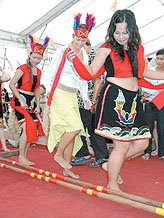 Tourists participating in a traditional dance

Large crowds of people from different ethnic groups as well as tourists from Brunei, Australia, England, Japan, Europe, Japan and the United States, converged on the venue to witness the colourful events that marked the closing of this year's Harvest Festival, which was themed "Peace Through Culture".

The guest of honour was welcomed and accompanied to the stage by the Sabah Deputy Chief Minister/Minister of Rural Development, Datuk Seri Panglima Joseph Pairin Datuk Kitingan, who was also Chairman of the Pesta Kaamatan; the Chief Minister of Sabah, Datuk Seri Panglima Musa Haji Aman; and the Minister of Science, Technology and Innovation, Datuk Dr Maximus J Ongkili, who was also the Coordinating Chairman (Kadazandusun Culture Centre) of the Tadau Kaamatan.

To mark the closing ceremony, the dignitaries took part in a ritual which included the pouring of the paddy from the "sukat" into the "Tangkob", followed by the beating of the gong seven times.

The official closing ceremony was followed by a performance by a choir from Beaufort District. A dance-drama was also performed by the artistes from the Sabah Cultural Board and cultural troupes from the respective districts.

As the event came to an end, the audience anxiously waited for the announcement of the winners of the beauty pageant, Unduk Ngadau 2008. This year's champion was Leonie Lawrence Gontuni, 20, from Penampang, while first runner-up was Florence Masimbin, 23, from Kinabatangan and second runner-up was Emily Majil, 20. They were crowned by the Sabah Head of State's wife, Toh Puan Datin Seri Panglima Hajah Dayang Masuyah.

Courtesy of Borneo Bulletin
Posted by e-borneo.com at 5:36 PM