Nomadic treasures on show in Mulu 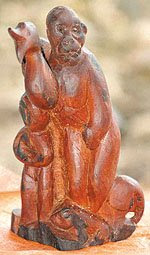 Carving of an orangutan 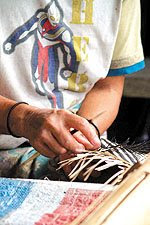 A Penan woman showing how to make a rattan mat 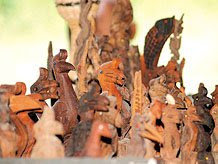 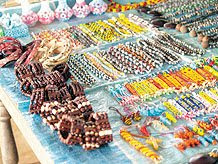 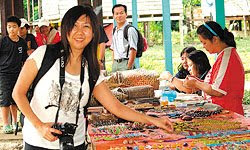 At the Mulu Park Headquarters, we waited for about 10 minutes before we were ushered by the park guide to the jetty where a longboat awaited us. We hopped onboard and put on our life jackets.

We departed against the river's current. The longboat glided steadily along the water, which was quite murky because of the rain the night before.

We started to enjoy the cool morning breeze and green surroundings. But our pleasant boat ride was interrupted as the skipper steered the boat to the riverbank, which was lined with rustic little houses.

The Penan Settlement at Batu Bungan took about five minutes (depending on the river's current) to reach by boat from the Mulu Park HQ. It was set up by the State Government to relocate the nomadic Penan.

There is legend that surrounds this village. 'Batu' is the Malay word for rock and Bungan is said to be the name of a folklore princess who died waiting in hunger and exasperation for her lover to return. She made a bamboo flute which she played as she waited in vain for her lover's return.

The villagers heard the sad song and followed the tune, eventually finding her dead body amongst the rock of Batu Bungan.

It is a picturesque 'kampung' (village) set in natural settings with the mountains as a backdrop.

There was a spread of grassland bordered by a couple of longhouses, a row of little houses and a long shelter for the daily 'tamu' or market. On the other side is an unblocked view of the mountains.

At the 'tamu', we mingled with the local Penan - children, adults and the elderly. Before being relocated, the Penan used to be nomads, hunting in the forest and fishing in the rivers.

They are quiet, humble and friendly people. There are about 200 inhabitants in this village.

That morning, the mountain peak played peek-a-boo behind the thick mist.

Since the settlement was included on the itinerary for those going to the Wind and Clearwater Caves, the local folks grabbed the opportunity to sell their beautiful and intricate handicrafts such as necklaces, bracelets, earrings, tikar (mats), machetes, kitchen utensils, rattan bags and blowpipes.

Courtesy of Borneo Bulletin Weekend
.
Posted by e-borneo.com at 6:39 PM