AirAsia to fly 2X daily from KL to Brunei 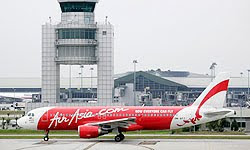 AirAsia has announced it will have two daily flights from Kuala Lumpur, Malaysia, to Brunei Darussalam, from August 25, 2010 onwards.

To celebrate AirAsia's new daily flight from Kuala Lumpur to Bandar Seri Begawan, the airline is offering "all-in-fares" from as low as RM29 (for a one way ticket) for the travel period between August 25, 2010, and May 8, 2011.

According to a press release from AirAsia, travellers will be able to book this "ultra-low" fare online at www.airasia.com between July 14 and July 25.

"The introduction of this additional morning flight to Brunei will enable business travellers to have the convenience of a day trip to Brunei for meetings and vice versa, thus fuelling the economy expansion of both Brunei and Malaysia and increasing foreign direct investments," she added.

According to Kathleen, places of interest in Brunei such as the Royal Regalia Building, Jerudong Park Playground and Jame' 'Asr Hassanil Bolkiah Mosque will continue to draw in visitors.

In conjunction with the additional daily flight to Brunei, customers can also enjoy special promotions for holiday packages to the Sultanate such as a three-day, two-night stay in Brunei (including a return air ticket) from as low as RM202 per person. To learn more about this promotion, visit www.airasiago.com

AirAsiaGo.com offers guests personalised holiday packages with more than 70,000 hotels worldwide and over 5,000 tours and activities.

For real-time updates and promotion updates, guests can stay connected with AirAsia via Facebook at www.facebook.com/AirAsia and on Twitter via www.twitter.com/AirAsiaDotCom. For more information, visit www.airasia.com.
Courtesy of Borneo Bulletin
. .
Posted by e-borneo.com at 6:06 PM