Exhilarating journey to Tip of Borneo 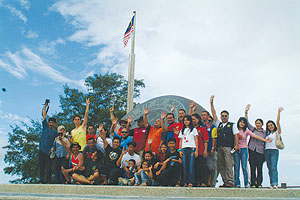 Group photo in front of the Tip of Borneo landmark 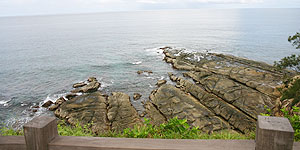 A view of the South China Sea 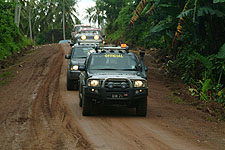 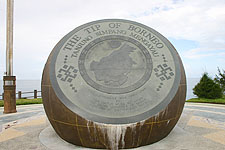 The Tip of Borneo landmark 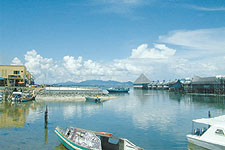 View of the Tourist Centre taken from the main road

We arrived in Kota Marudu just after 5pm and stopped for meals at one of the town's restaurant. Just like any other stops, the people here welcomed us by blinking their headlights and waving or giving the thumbs-up to us along the route.

By 6.15pm we reached our accommodation for this stop over. The Green Land Hotel, although not as luxurious as the one in Sandakan, was ample enough for us to get a good night rest.

Right after check-in, everyone was ushered to the nearby restaurant for dinner.

While others opted to take another round of meal at other nearby places, some stayed back to enjoy their cup of coffees and teh tariks and cracking jokes about funny things they encountered while on the road.

From what I can see, most of the shops were closed very early in the evening except for entertainment spots and eateries. Kudat was much more quieter than the other towns we had visited.

The next day, after breakfast at around 10am, we began our final leg of the road tour to Kota Kinabalu.

By this time, I can tell that everyone was relieved and very eager to conclude the final leg of the expedition.

From Green Land Hotel, we headed to Simpang Tanjung Mengayau or better known as the Tip of Borneo overseeing the South China Sea.

Here lies the nature's undisturbed beauty except for the man-made pathway for easy access for visitors.

Along the way into the area, we passed by old-fashioned houses that are still standing strong on the grounds and passing by the beach on our way up to the Tip of Borneo landmark, its captivating to see the beauty of the clean beach sand and clear waters.

Everyone was eager to disembark from the car and took a short uphill walk to where the landmark proudly stands next to the national flag. Video and photo shots were captured to mark that the Brunei Ford Ranger Trans Sabah participants were there, on the grounds of the Tip of Borneo.
Courtesy of: Borneo Bulletin

Email ThisBlogThis!Share to TwitterShare to FacebookShare to Pinterest
Labels: Kudat, Tip of Borneo