Cultural dance of the hunt at Sarawak's Cultural Village

Cultural performance at the theatre 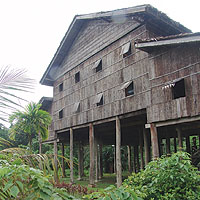 House of the Melanau tribe 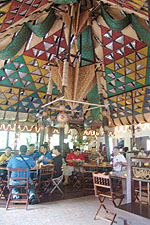 Selection of the traditional handicrafts on offer at the cultural village

Sarawak Cultural Village is a spot definitely worth checking out. Dubbed the 'Living Museum' by locals and tourists alike, the cultural village only employs ethnic indigenous people of Sarawak. This 17-acre site, nestled on the foothill of the legendary Mount Santubong and fronting the South China Sea, offers an excellent introduction to local culture and lifestyles. It is situated 32 kilometres, or 45 minutes' drive from Kuching.

Like a museum, the Cultural Village showcases many artefacts from the past. The biggest attraction of the village is that visitors can walk around and experience the way of life of the different ethnic backgrounds of Sarawak's rich heritage.

Visitors can walk freely from one settlement to another and enter the exact replicas of ethnic houses that are built by the natives of Sarawak. In each settlement there are ethnic tribes of people who live and work in the cultural village.

They will guide visitors around their settlement, and present to them their own individual tribe. Their culture, customs and beliefs will also be explained to those visitors who wish to learn about their history and culture.

Among the replicas of buildings that represent every major ethnic group in Sarawak are longhouses of the Iban, Bidayuh and Orang Ulu, a Melanau tall-house and a Chinese farmhouse. The village also has a theatre where visitors can enjoy a multi-cultural dance performance. They can also treat themselves to traditional delicacies at a restaurant situated there and browse for mementos at the handicraft shop. Visitors can even 'get married' at the Sarawak Cultural Village, in traditional Iban, Malay, Bidayuh or Orang Ulu style.

The longhouse has separate rooms placed side by side, all of which open to a long communal hall used for leisurely activities like woodcarving and basket weaving. Guests are often invited to attend nightly ceremonies and drink a potent rice wine called 'tuak', which the Ibans make themselves.

There is also an opportunity for visitors to stay over in one of the several ethnic houses. Rooms are provided for home stay visitors, with each room being authentically traditional. As there is a need to retain the traditional feel, there is no air-conditioning. For those who are adventurous and would like to experience what the natives of Borneo experience when they stay in their houses, the cultural village will provide for them.

There are about 150 people from Sarawak's wildly diverse tribes living in the village, demonstrating traditional daily activities like the processing of sago and the making of handicrafts. They wear traditional costumes and also put on dances for visitors. The village residents provide information on their various traditional cultures and lifestyles.

There are seven ethnic houses, ranging from the Bidayuh round huts, Iban longhouse to the stilthouses of the Melanaus. The centre offers an insight into traditional pastimes such as tattooing, blowpipe making, weaving of the "pua kumbu" and top spinning. Traditional dances are also a common sight in this village.

The Sarawak Cultural Village portrays the state's rich cultural diversity in one single place. A typical Sarawakian's warmth and hospitality awaits visitors to the village. The hosts are always keen to share the arts, crafts, games, foods and music of the seven major cultures of Sarawak.

After touring the village, enjoy a multi-cultural dance performance in the village's own theatre, where each tribe will showcase their own unique traditional dance. Here, visitors are invited to participate in the dance at the end of the show.
Courtesy of Borneo Bulletin
Posted by e-borneo.com at 6:06 PM