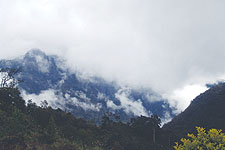 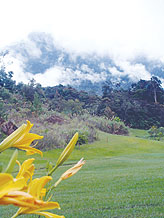 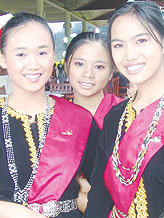 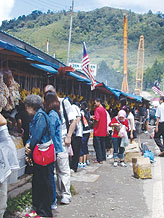 Mount Kinabalu is the highest mountain of Borneo. It is located 70 miles from the northern tip of the island. It is an impressive flat-topped granite block, rising in isolation, thousands of feet above the gently sloping plain.

It is a rugged, heavily eroded mountain, scarred by gullies, with jagged rocks and sharp pointed peaks surrounding the main terrace. The lower slopes are farmed, while the higher slopes are covered in thick jungle with rich biodiversity. The mountain's high peak is easily climbed, but all other peaks require rock-climbing skills.

Many of the trees and flowers are unique or extremely rare but to the uninitiated novice in matters botanical there is no doubt that the pitcher plants steal the show. Even the most casual observer cannot fail to notice these impressive insect guzzling monsters with up to a pint of liquid waiting to lure and drown the passing fly or mosquito.

Mount Kinabalu is considered to be the highest mountain in South East Asia, although there are higher mountains in Indonesia, on the island of Irian Jaya (Indonesian New Guinea). These include Puncak Jaya, also known as Carstensz Pyramid, which is 4884 metres high. This is generally considered as part of Oceania and is climbed as such by people who like to climb the highest mountain on all of the seven continents.

There are two theories about the origin of the name Kinabalu. The first is that Kinabalu stands for 'Chinese widow' with Kina being a corruption of China and Balu being a commonly-used term for widow in the local languages. The story goes that a Chinese prince visited the region and climbed the mountain.

This was either to look for a giant pink pearl or to slay a dragon that was terrorising the neighbourhood, or both of the above. After accomplishing these mighty deeds he fell in love with and married a local girl. He then returned to China, promising to come back for her, but never did.

If that's too sad for you, an alternative explanation is that it stands for 'the revered place of dead' in the local language.

The first person to climb the mountain was Sir Hugh Low, a British colonial officer, in 1851. The indigenous peoples of Sabah didn't climb the mountain to the top because they believed that it was sacred and home to mountain spirits. (Probably also because they considered it a pointless activity - nothing to eat at 4,000 metres after all.)

He relates that the hardest bit of the expedition was hacking through the jungle from the coast to reach the base of the mountain. During the ascent his local guides required the sacrifice of white cockerels at a regular basis along the trail, in order to appease the mountain spirits. It is now not necessary to strangle one's own chicken, as the sacrifice is performed annually with the appropriate ceremony.

Of course now we have the modern roads to help us on our climb to the summit. Though the roads are just as treacherous, narrow winding roads with plenty of blind corners, not to mention daredevil truckers who hug the blind corners at high speeds. Accidents are more common than naught, and most of which are fatal.

At 3pm like clockwork the mountain fogs up. Locals would advise travellers to either stay put, or put some warming clothing on, as at this time the temperature drops, the clouds cover the mountain, and visibility is almost zero.

The thick mountain fog makes it the mountain road a treacherous road to travel on. Even with your headlights on to the fullest it will still not cut through the fog. Worst still if the cars are using halogen lights. The light will reflect back from the fog and would make matters worse.

Yellow fog lights are preferable, it won't cut through the thick fog, however it will let oncoming cars know that there's another car coming. It is slightly safer, but only just.

The drive up to the summit is steep. It will take a toll on the brakes and the brake lining of the car, so always check your car's brake fluid and braking system before the drive up. Its dangerous especially when the brakes fail when the car is descending the mountain. Accidents always happen because of lack of preparation and failing brake systems.

All in all though the ride to the top is worth it. One would feel slightly dizzy once nearing the summit, it's either from the breath taking view, or the lack of oxygen due to the height.

Mount Kinabalu is an experience like no other. Breathtaking views, beautiful sceneries, magical histories, and rare flora and fauna only found on the mountain. Pay a visit and stand tall on the tallest point in Borneo.
Courtesy of Borneo Bulletin
Posted by e-borneo.com at 6:19 PM