Agnes Keith’s house: In a hall where history echoes 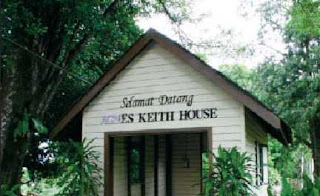 Walking into the white colonial style house on top of a gently sloping hill, I felt like I was walking towards a past…my past and the people’s past. For that house look like the houses my father (a carpenter) used to work in for opulent families in the 1960’s.

In those days, the style was vogue and almost everyone who could afford to build a house would make something like that. Even our first house that departed from the palm fronds roof- norm looked like that.

In my village these types of houses are disappearing and most people now live in the uniformed terrace or apartment buildings. So it is understandable that walking into that particular colonial style house, built on a hilltop at Jalan Istana in Sandakan encouraged ‘déjà vu’ or the strongest kind. To me at least.

I believe our tourists will also love to walk through that house, if not for the memories but for the historical value. This house is almost 100 years old although it was damaged during the Japanese occupation and repaired after that.

This house which is taken care of by the Sabah State Museum’s claim to fame is that the author Agnes Keith lived here with her husband, Harry, who was Conservator of Forest and Curator of North Borneo Museum during the time of the British.

The couple lived in that house until they were interned in 1942. After the war the Keiths returned to Sandakan to find the house destroyed. They built a new house in 1946-1947 on the original footprint and in a similar style to the original.

They named this house Newlands and lived there until they left Sabah in 1952. After nearly fifty years of gradual deterioration, first under tenants and then as an empty shell, the house was restored by Sabah Museum in collaboration with the Federal Department of Museums and Antiquities in 2001. 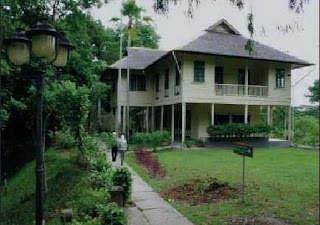 The house is deemed a rare survival of post-war colonial wooden architecture. It was opened to the public in 2004 and is a popular tourist attraction. It contains displays on Agnes and Harry Keith as well as information about colonial life in Sandakan in the 1900s.

Keith’s contribution to the perpetuation of Sabah History is the fact that she wrote three internationally-acclaimed books on Sabah while living in the rebuilt house. She wrote a book about life in North Borneo in the 1930s, which was called "Land Below The Wind". After the war, she wrote "Three Came Home" which dwelled mostly her experience in a Japanese War Camp. Her third book was "White Man Returns".

Anyways, there are several artefacts belonging to the couple there, including photographs of the couple and their children. If you are interested in history and the life of the people during the colonial era, visit Agnes Keith’s house. After that you can enjoy an English Tea at the English Tea Garden nearby.

Email ThisBlogThis!Share to TwitterShare to FacebookShare to Pinterest
Labels: Land Below The Wind, Sandakan